It's amazing how many people have put themselves into hot water by posting or having things posted about their behavior on the Internet. Consider the following:

An Obama speechwriter is in trouble for joking around with a friend and pretending to grope the breast of a Hillary Clinton cutout. 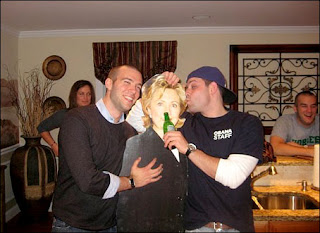 In the sports world, a Calgary Flames hockey player is about to be suspended for comments he made regarding another player picking up his "sloppy seconds" (i.e. his ex-girlfriend).

But one need not look to the famous to see examples of people screwing up their lives because of some bad behavior appearing on the internet. Workers have been fired for postings made on Facebook. Criminals have been caught showing off or doing bizarre things and then bragging about it on the Internet.

What is it with people? Once upon a time, people had pictures taken at inopportune times, and they could burn the negatives and be done with it. No more. Now those pictures can be taken with a phone and emailed around the world before any explanation or apology can be issued. Even the burning-the-negatives-and-prints strategy is not a guarantee that personal foibles remain private. Digital scanners can commit those pictures to electronic format, and from there they end up who knows where.

Aside from the crudity and general stupidity of the actions, there's also this seemingly willful ignorance of how actions performed in the virtual world can affect the real world. The internet, with its limited, albeit worldwide opportunity for publicity, allows people to put their personalities "out there" for all to see. I've succumbed to this myself, via blogging and Facebook. But I also know that my coworkers and managers either read or see what I do. Thus my unwillingness to get extremely foul in my language or to post pictures from friends' bachelor parties. The electronic world has made everyone potential victims of tabloid journalism, and I don't think Gen Y has fully absorbed what that can mean for their futures.

The bottom line on all this is that, if you do something stupid and photographic evidence exists that you did said stupid thing--or you yourself have posted that evidence--you have to accept that there will be consequences. That Obama speech writer and hockey player are about to learn what those consequences are. With the internet and wireless and digital cameras everywhere, it is increasingly difficult to avoid any private sins from becoming very public. And that lack of privacy and public willingness to display (or unwillingness to hide) bad behavior can result in you losing your job. It might not sound fair, but it is very much the way of the world.

There was a phrase that was very popular in the '60s: "The personal is political." Well, welcome to the 21st century, where "The personal is professional." Meaning, if you exhibit some sort of negative personal behavior or attitude or belief, and it's on the internet, your professional future can be eroded very quickly if you embarrass your employer. Bosses can Google, too.