Various Items and Comments Regarding the Economy

President Obama's $800+ billion-dollar "stimulus" bill is a problem for people who believe in classical economics. It is mostly about federal spending on various sorts of pet projects, political favors, bailouts of failed banks and businesses, and perhaps creating a nationalized Bank of the United States. The tax base cannot support it. Since the Dow Jones Industrial Average dropped from 11,000 to around 8,000, we've lost at least a trillion dollars in value from our economy. Businesses have closed their doors, unemployment has gone up, interest rates are at essentially zero yet no bank will issue new loans. This is a crisis of confidence, and a new government expenditure of a trillion dollars, unsupported by the tax base or the monetary system, can only mean one thing down the road: hyperinflation. Hyperinflation is simple to understand--too much money is created, prices continue to increase, leading the government to print more money to help people artificially keep up with rising prices, causing the value of the currency to drop.

My "favorite" image of hyperinflation occurred in Weimar Germany, the republic formed after Kaiser Wilhelm II's regime collapsed in 1918. In the economic hardship and uncertainty that followed from crushing war debts, Germany's currency was inflated to pay the debt. Citizens of Germany faced mounting inflation, to the point where instead of US$1 equalling 60 Marks, US$1 equalled 8,000 marks. People were going to the store with wheelbarrows full of money to buy a loaf of bread. The value of the Mark collapsed because there was nothing of value backing it--at the time, gold was the standard for backing national currencies. 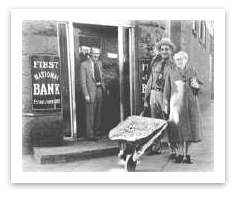 Since the U.S. went off the Gold Standard in 1973, the dollar has had a value accepted based on currency speculation and the full faith and credit of the U.S. Government. That is, people in this country and around the world believe the dollar has value because the U.S. Government says it does and is willing and able to back up that value with something of tangible worth. It is "fiat money," from the Latin term "fiat" meaning "let there be" (ex. "fiat lux" - let there be light). So: the U.S. Government says, "Let there be money," and lo, it was so. But that sort of money only lasts so long as people believe in the ability of the U.S. Government or its people to create enough value in this country to consider the dollar still believable. When the government says, "We're going to spend a trillion dollars to fix the economy!" some folks might say, "Great!" Others, a little more cautious, would ask, "Where's the money going to come from?" The sources, given the current state of things, are limited:

Curious about what happens with inflation? See that article on Weimar Germany or these items on the inflation occurring right now under dictator Robert Mugabe in Zimbabwe (formerly Rhodesia):

Okay, so what about raising taxes? You might recall that businesses all over the country are facing profit losses because the economy is slowing. Unemployment is rising because businesses are cutting costs (employment) in order to stay afloat. They are unable to expand into new ventures because fewer consumers and investors have money to buy into them and because banks are unwilling to loan money. So there's less money to go around to support economic growth, and some folks want to raise taxes on businesses. That will slow down how well money flows through the economy (liquidity), as the government gets more and businesses capable of building long-term employment shrink further.

We could, have, and probably will, borrow more from other countries who can afford to buy U.S. Treasury Bills: Europe, Japan, China, and (surprise, surprise), the oil sheikdoms of the Middle East. The first problem is that an economic slowdown here cuts down economic activity elsewhere, reducing the amount of money available overseas to buy our debt. Second, T-Bills are, like the dollar, backed by the full faith and credit of the U.S. Government, with the difference that they actually have a due date for a return on investment. If other countries no longer believe that the U.S. will ever repay the debt, they might stop buying our T-Bills or declare us to be in default, which amounts to the same thing. Back when Japan was still our biggest economic competitor (from the mid '80s to the early '90s), there was some loose talk about Japan accepting the state of Hawaii or California as "payment" for our debts. Could that idea arise again? Who would buy that?

The best ways government itself can increase tax revenues, create jobs, and stimulate businesses are to lower taxes, reduce intrusive regulations, create and maintain infrastructure, and keep government out of competition with the private sector. The best ways private industry can create growth are to find new sources of wealth, develop new technologies, and create new businesses.

The best place for this nation to do those things is in space. As of yet, I've not heard about any new money going to NASA or any tax breaks going to businesses seeking to start businesses or prospect for resources there. But, of course, I'm a conservative and a kook, so what do I know?

This whole thing is just insane because the government is most likely to pick options 1, 2, and 3, which will stifle option 4, thereby slowing the recovery. Amity Shlaes' The Forgotten Man has never been more timely.