Revised April 11, 2009
The toy is now in residence--it arrived early: bonus! The first thing they tell you is that you need to charge it up (no surprise there). "It should take less than three hours." In fact, the yellow light by the charging port went from yellow to green in 2.5 hours. The machine comes with a for-dummies guide to get you started, followed by very extensive user manual built in. I read about half of it while it was leashed to the power cord.

The text is clear, easy to read, and adjustable. One important thing to do, if you want to buy things with it, is go to their "Manage Your Kindle" site first so you can attach a credit or debit card to the machine. Otherwise, your purchases are going nowhere! No charge for wireless access, though. Very cool!

There are several features about Kindle that I like. The machine itself includes a text-to-voice feature to read to you via the book speakers or earphones. The downside of this feature is that the voice is rather flat and quiet--rather like listening to an NPR news anchor with the sound down. Somewhere I read that I can switch the voice to female, and I might just do that. I should be grateful for the monotone, though: I bought Mark Levin's Liberty and Tyranny, and while I respect the man's mind, his voice is more than a little annoying. I presume it's possible to buy a "book on tape" and get the author's voice, but I'm not sure that's always a good thing. Anyhow, I can take this book on the road with me when I go on long road trips, which is a good thing.

The keyboard is a little small, but the entire package is about the size of a trade paperback, so it's hard to argue with that. The leather case (~$30 extra) includes a couple of metal clasps that attach directly to slots on the side of the machine, so it won't fall out easily.

I bought some political/philosophical books I've been wanting to read for awhile, as well as the Kindle version of Les Misérables, since it's about half the size of the dead-tree version. I used the search feature to locate and mark my place in the book, but this is NOT the same translation that I bought in the store--frustrating, since the image from the Kindle Store is the same one that's on my book cover. I do like the fact that the Kindle remembers where you were in the book next time you open it, so the "book mark" feature (a little icon at the upper right of the page that looks like a page dog-ear) isn't really necessary. You can also select and highlight various passages, which is good to have, since it saves me the trouble of trying to remember why I marked off a particular page--I'm a relentless marker and bender of books.

One thing I heard someone complaining about with the Kindle is that it's impossible to tell how much progress you've made in reading. If that's true with the original, Kindle 2 has rectified it by showing a progress bar and % done number at the bottom of the screen. When you leave the machine alone for 10 minutes, it switches over to its built-in screen saver--images of authors.

As an experiment--and to prove to my former reporter buddy that newspapers have the same quality electronically as in dead-tree form--I bought a subscription to the Wall Street Journal. Once you turn on the wireless "WhisperNet" internet access, the next day's subscription downloads to your machine. The subscription is cheap, $9.99 per month, but doesn't include Sundays. That's fine, even I need a break from the world occasionally. The machine will archive things for you until you delete them. During the purchase process, I noticed that Kindle offers a "download a sample" feature, which is similar to the previews they offer on Amazon.com.

As far as functionality goes, reading on Kindle is a wee bit different from reading paper books, obviously. The machine includes the following buttons:

Am I happy with my purchase? Sure! The content is the content--and the prices for books I've bought so far are ridiculously cheap (so far: Liberty and Tyranny, The Spirit of the Laws, Les Misérables, and The Wall Street Journal). Now I've got to figure out what to do with all the dogeared, marked-up dead-tree books in my apartment. Hm... 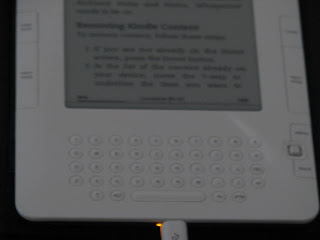 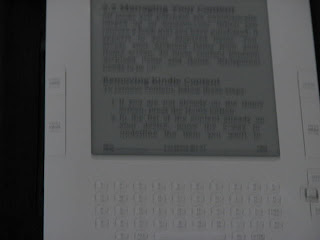 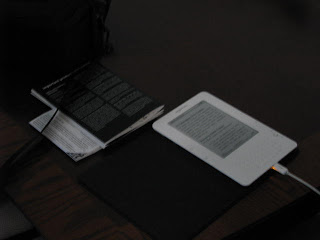