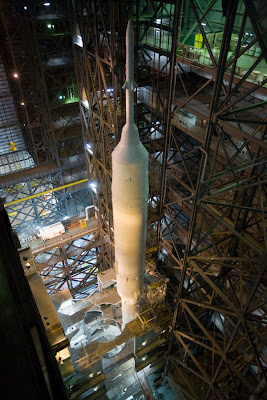 First, something to brighten my rather rough week: the Ares I-X rocket has been stacked fully in the Vehicle Assembly Building, all 327 feet of her. Saaaaaa-lute!

CAPE CANAVERAL, Fla. -- For the first time in more than a quarter-century a new space vehicle stands ready in NASA's Kennedy Space Center Vehicle Assembly Building. The Ares I-X rocket, its simulated crew module and launch abort system are assembled on a mobile launch platform at Kennedy in preparation for launch this fall.

The final segments of the Ares I-X were stacked on Aug. 13, completing the 327-foot launch vehicle and providing the first look at the finished rocket's distinctive shape. The Ares I-X flight test is targeted for Oct. 31.

"More than three years of hard work with the NASA and contractor team has brought us to this historic moment," said Bob Ess, Ares I-X mission manager. "This flight test is a critical step in continuing our design process for the Ares vehicle and the first flight for the Constellation Program."

The Ares I-X is wired with more than 700 sensors to gather data during the two-and-a-half minute flight test. The launch will provide NASA an early opportunity to test and prove hardware, facilities and ground operations associated with the Ares I crew launch vehicle. The data collected during the launch will allow NASA to gather critical data during ascent of the integrated Orion spacecraft and the Ares I rocket.

Now that the Ares I-X is assembled, numerous evaluations will be run on all the rocket systems, including complex instruments that will constantly measure the vehicle's movements as it launches and the first stage separates. The evaluations include a process called "modal testing," which will shake the stack slightly to test stiffness of the rocket, including the pinned and bolted joints.

The Miami Herald has a story on the Augustine Panel…

A dog cloning business has started in South Korea. This is not a good sign. Once again, our technology advances are outstripping the ability of our culture to absorb, slow, or stop them.

Michael Vick has found a new gig in Philadelphia after spending time in jail for running a dog fighting ring from his home. You know, I think the man was punished enough legally. One would have thought that the social stigma and bad publicity about his bad actions would be enough to keep him out of professional football. This not a good sign for the NFL, the Philadelphia Eagles, or the culture at large. Shame on them and shame on us. Eagles fans still have a chance to stop this by not showing up for games when Michael Vick shows up to play.

And while I do have concerns about the advances our technologies make, it is nice to see that some tech is being used for constructive (or at least neutral) purposes. This site has some very intriguing work.

From the office, a story on Mars not being an immediate plan, but a goal.

Got this from Doc, and just had to share because it is oh so true about my line of work:

1. Ask engineer how the damn thing works.
2. Deafening silence.
3. Crickets.
4. Tumbleweeds.
5. Just start writing something. Anything.
6. Give this something to the engineer.
7. Watch engineer become quite upset at how badly you’ve missed thepoint of everything.
8. As the engineer berates you, in between insults he will also throwoff nuggets of technical information.
9. Collect these nuggets, as they are the only reliable technicalinformation you will receive.
10. Try like hell to weave together this information into somethingenlightening and technically accurate.
11. Go to step 6.

Sigh...yet another story on the dismal prospects for what might come out of the Augustine Panel. I must confess that even if I understand what options the panel will offer to Obama, I have no clue what option he will take, what its full impact will be, or how long it will take for said course to be taken. I'm just along for the ride, albeit I'm one of the folks at the front of the roller coaster, so I'll see the next curve before some folks, but that doesn't make the ride any more fun.

In other space news, India has started an astronaut training center, while Bulgaria's scientists want that nation to join the European Space Agency. So while we're debating in this country if we should even have a space program, dirt-poor former Eastern Bloc countries are trying to do what we seem willing to throw away. Why don't our leaders pay attention to these things? Perhaps it would be worth asking those nations, "What do you know about space that we don't?"

Congressman Mike Rogers (R-MI) has a good take on government healthcare on his site.

And that'll do for now.

Philadelphia football fans are infamous for harboring among their numbers people who throw D cell batteries at opposing players. Visiting teams are advised to wear their helmets while sitting on the bench. It sounds as though Vick's pastimes are simpatico with at least some Eagles' supporters.