Hangin' With Darlene the Science Cheerleader 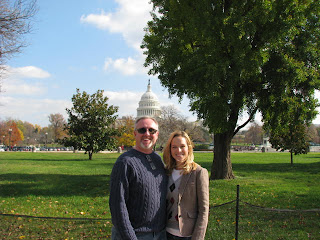 While I was in Washington this weekend primarily to discuss the 2011 International Space Development Conference (more on that later), I managed to talk Darlene the Science Cheerleader into hanging out to talk and walk around DC.


What exactly does one talk with a science cheerleader about, anyway? Well, why not science? Or NASA outreach? Why not indeed? I wanted to pick Dar's brain about my day job--education and outreach for the Ares Projects--and what I might try that's different. And while I was at it, I asked her what sort of stuff I probably needed to do/learn to keep up my skills. After all, there will always some young whippersnapper at my heels who can write faster and use 20 more apps that I'll ever hope to learn, so where can I add value in the future? As expected, Dar was quite helpful.

On the subject of NASA outreach, I asked her, "What doesn't NASA do well, or what could they do better?" Dar had an answer immediately: "If NASA wants more public support, NASA will need to be one with the people. That means getting its hands dirty with social media and hanging in the trenches where other agencies dare to go (sponsoring creative collaborations, for example, without feeling as though they've sold out)." I agreed with her. NASA is like Disney in that it is very protective of its public image. Heaven forbid that base commerce or simple fun might sully the great and glorious work of Exploring the Cosmos!

As far as what my fellow compadres and I can do to help with Ares outreach, Dar recommended looking for ways to improve science, technology, engineering, and math (STEM) education, which she's been working on in earnest lately.

Lastly, as far as what I could do to keep my own career skills sharp, Dar recommended that I stay on top of "Government 2.0" and "Web 2.0" activities--what's being done and how. For people to follow, she recommended:

Dar also showed me a video of an interview she did with with former Philadelphia Eagles defensive end Hugh Douglas on science. This is frickin' hilarious! I'd love to see this bit during a pre-game show or the Super Bowl!