Live On the Road with the Science Cheerleaders

If you’ve never been a cheerleader in high school, college, etc., that probably hasn’t stopped you from forming or having opinions about who they might be. Stereotypes abound:


(Fill in the blank).
There’s a group of past and current professional cheerleaders who will argue those stereotypes with you, and they are the Science Cheerleaders.

The original Science Cheerleader is Darlene Cavalier, who decided to embrace her previous career as a Philadelphia ‘76ers cheerleader as a fun and unique way to promote public science literacy, do-it-yourself science, and public engagement in science and technology policy. Her tagline is “Goooo, Science!”

Now Darlene has company, as she debuted a troupe of 11 women whose day jobs are in the science, technology, engineering, or math (STEM) fields, and whose not-so-secret identities were or are professional cheerleaders. Their careers range from aerospace engineer to medical researcher to computer programmer, doctor, nurse, and other healthcare-related professions. And where better for Science Cheerleaders to appear than at the inaugural Science & Engineering Festival in Washington, DC?

As Outreach Director, I got to tag along on the project as booth manager and lead logistician. (How I got that gig is a blog for another day.) What follows is a very high-level summary of more than three months’ work performed by many people.

So how, exactly, do you roll out Science Cheerleaders to an unsuspecting world? By having them do STEM-themed cheers, of course.

In addition to cheers, the show required music and dance routines. For these we turned to Laura, a choreographer at GoingPro Entertainment. Laura absorbed what Darlene had put together for a “Brain Makeover” science literacy project with the Philadelphia ‘76ers cheerleading squad, and then put her choreographer/cheerleader’s imagination to work. One of my personal favorite cheers runs something like this:

Addition! Subtraction! It gives me satisfaction!
Algebra! Chemistry! Math is where I want to be.


Throw in dance routines performed to “Weird Science,” “She Blinded Me With Science,” (and a couple others), and you have a general idea of what-all went into the show.

And, of course, what’s a cheerleader with a cute outfit (excuse me, uniform) to wear? Angela King Designs, Inc. came up with something that looked like it belonged on a team of superheroines, complete with SciCheer molecule logos: 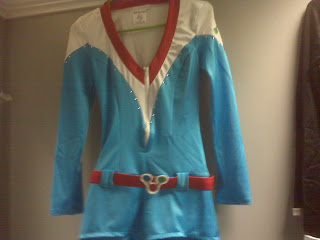 A lot of this was still theoretical, even though I had pictures of all of the Cheerleaders and had read and edited their interviews and translated that information into trading cards (more on that later). Laura sent videos of the dance routines they had to memorize by email link and left them to it to be ready when they got to Washington. But would all of this really come together?

We started filtering into a hotel in the Dupont Circle area and eventually met in a conference room for a team meeting and preliminary rehearsal. There were cheerleader uniforms and pom-pons on a side table, and the women I’d been emailing and nagging for several weeks (“You book your travel yet?”) were actually present. Darlene welcomed everyone and gave a brief background on they hows and whys of this project, from overcoming stereotypes to promoting education. Lots of nods around the room. These women got it, but then of course they would. Like Darlene, most or all of them had experienced some sort of negative treatment because of their appearance or their side job. “I feel like I’m in a support group,” one of them said, in a relieved voice. 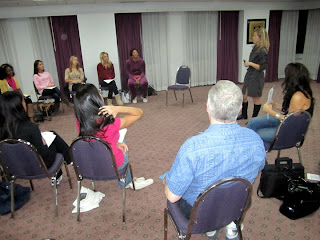 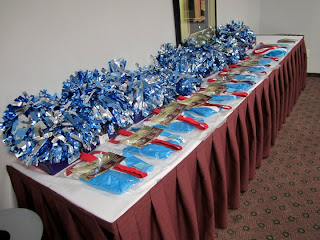 Then it was on to rehearsing. This was the unknown quantity for the organizers. Until we put 11 women who had never performed together into a room with their until-then virtual choreographer, would it all happen? We needn't have worried. Past or present performers, they’d put in the time around their technically demanding day jobs and learned all four of the primary routines. Darlene and I stood back and watched as Laura directed or demonstrated with easy grace bends and postures that would probably have thrown my back out in 30 seconds. The cheerleaders had their own standard, specialized vocabulary for moves that I just took for granted: “No, down. A delayed down, not emergency down.” “Right arm hunch.” And so forth.

And they were doing it all in time, in unison, looking like the team they were supposed to be. Never underestimate the power of rhythm. Randy, the videographer who was going to be directing the video of the Science Cheerleaders, and I both remarked, “Jeez, they’re good!” It was starting to come together.

The next morning, the troupe headed off toward the Metro, bearing their boots, makeup touchup bags, and trading cards. 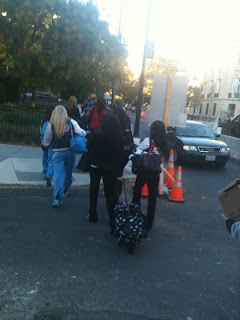 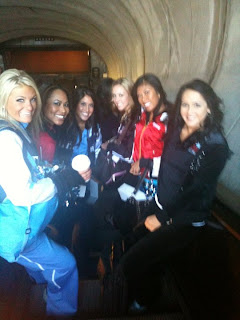 Trading cards? You bet. Or, as Darlene and I called them most of the time, baseball cards, like the sort you’d get with a pack of gum. For each of the Science Cheerleaders, we created a SciCheer card with images of the woman in cheerleader and day-job garb on one side and background information on the other. The info included their name, home, cheer teams, education, career path, their reason for getting into science, and whatever words of wisdom they cared to impart to young women. 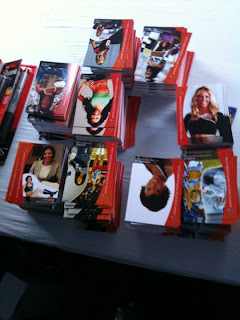 Whether through timing or design, I had not actually seen any of the Science Cheerleaders in their full uniforms until we arrived at the Wilson Center Plaza. The first one I saw was Stephanie, an aspiring math teacher. And so help me, she looked like a super hero: 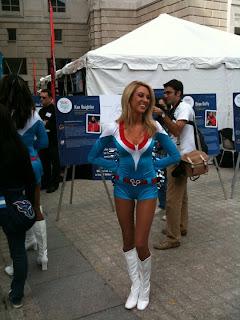 One of the downsides of running the booth was that I had to set up the darn thing while the Cheerleaders were rehearsing and performing. Finally someone in the Science for Citizens booth said, “What are you still doing here? Go!” So off I ran to catch the last two minutes of the first performance. I found around 30 people standing around the Wilson Plaza stage cheering or making other appreciative noises. Then I finally got close enough to watch the performance, and the Science Cheerleaders were real: 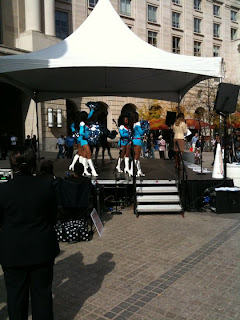 And the crowd dug it. Smiles and applause all around. I went back to the booth, happy that things were heading in the right direction. Once the Cheerleaders appeared (in shifts—the tents were rather small), I got out of the way. They might or might not have listened to my spiel, but they handled visitors and autograph seekers like the pros they were. 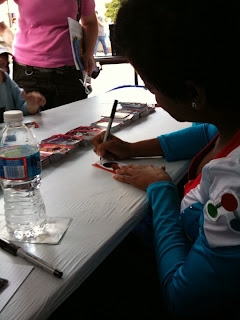 I wish I’d captured one of the “Disney moments” I watched. A little girl wanted a picture with Stephanie, and it was like watching a kid meet Cinderella at Disney World. The Science Cheerleaders, in person, could provide the one thing we couldn’t guarantee with any of our planning, but which was essential to the success of the whole thing: magic. 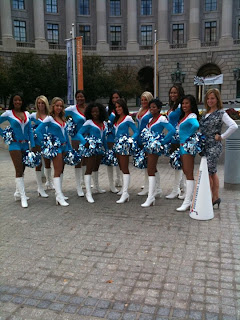 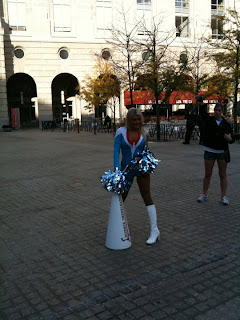 Having done the first performance and an extra one on Saturday, the Science Cheerleaders were revved up and energized for day two. 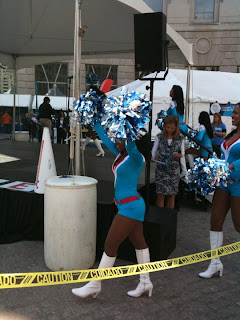 The crowd was bigger on Sunday, which helps performers, and the crowd reactions were great. Cheers went up as their individual educations and careers were announced. The crowd “got it.” Putting together these cheerleaders with their day jobs was like some sort of revelation to many I talked to, often getting the roles confused (“You mean she’s a doctor too?”). But the Science Cheerleaders made an impression, on the whole a good one, and the women involved got to share their stories with a curious public.

What Makes Science Cheerleaders Tick (Or Ticks Them Off)

In between performances or autograph signings, I tried to speak with as many of the Science Cheerleaders as I could (jeez, who wouldn’t?) or listened to them talk with each other. The topics ranged from beauty tips to boyfriends to babies.

The fact that they faced a social stigma attached to cheerleading rankled. Several of them agreed that they took the most social grief from other women, not men. “You get used to dirty looks,” one told me. After that, I started watching the men and women we passed as the Science Cheerleaders interacted with the Festival crowds. Men gaped or leered or tried to pretend they weren’t staring. Women’s reactions ranged from mild disapproval to disgust to pride or support for what they represented. A wife, seeing her husband walk their daughter up to the booth, got so incensed that she stormed away.

I had only one conversation along these lines all weekend, which surprised me a bit. A middle-aged woman walked up to me and interrupted me as I began my standard spiel. “Oh, I know who you are. I just find the whole thing rather sexist.”

To this I replied, “Well, they find it liberating.”

A bit flummoxed by my reply, the woman finally sputtered, “I suppose we’ll just have to agree to disagree on this.” Indeed. But I couldn’t help watching others watch the Science Cheerleaders. Was it really, as one of them put it, that “Some women just don’t like the idea that some of us could have it all”? I wonder.

What interested me about all of the Science Cheerleaders I talked to was that they all had definite or at least partial plans for the future, Darlene included: another degree, their own company, a particular line of work, or marriage and family. Some even had specific timelines in their heads.

If you read their baseball cards, the “Follow your dreams!” theme is common. All of these women, to one extent or another, have been doing just that. That sort of practical, future-thinking dreaming requires skills that anyone can possess if sufficiently motivated: desire, time management, hard work, and persistence—skills that transfer to parts of life far beyond cheerleading, most especially science and technology. Perhaps the constant training keeps them moving. Many of them, during football season, work out three to five times a week in addition to game days. They attend interview classes, sign team behavior codes, and are trained to always be “on stage.” If you asked them how they got to where they are now, I’m sure they could all answer the same way: “I worked at it!”

The Future of Science Cheerleaders

Where do Darlene and the Science Cheerleaders go from here? It will be for Darlene to decide how to best put this new phenomenon to work. The Science Cheerleader site has already sprouted two “spinoff” sites: Science for Citizens and ECAST (Expert & Citizen Assessment of Science & Technology), both of which taken on a life of their own. 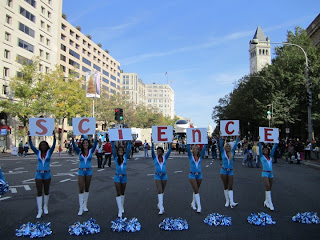 Bart Leahy is a gopher who lives in a cozy den somewhere in Northern Alabama. He doubles as the Outreach Director for ScienceCheerleader.com

Email ThisBlogThis!Share to TwitterShare to FacebookShare to Pinterest
Labels: cheerleading, Darlene the Science Cheerleader, personal, women in science and engineering

Thanks, Bart. Here's another cheer for you: We [heart] Bart!

I think you really pinned the theme of the Science Cheerleaders.... everyone deserves to defy stereotypes. You CAN have it all. I remember getting criticized in high school for being in theatre, track, pom squad, student council and National Honor Society. And now I know why. Classmates who would say "why are you talking to them?" were too afraid to cross the imaginary line. People find comfort in stereotypes - it takes courage to reach beyond the norm.

Great blog, Bart, I look forward to seeing the development of the Science Cheerleaders!