Tomorrow's my first day off (from the day job) since last Sunday. I know, I know, be happy you have a job...but jeez, since when is a proposal enough of an "emergency" to miss Da Bears in a championship game against the Packers? Sigh...just whining, don't mind me. There's still lots of interesting stuff going on out there in Cyberland, so I might as well share what bits of junk--er, important and interesting information, that is--I've found in my electronic travels. Enjoy if or as you see fit.

Starting from the top of the pile (most recent), and unfortunately it's a bummer: another warning from Norm Augustine that America is falling behind and in trouble in science and technology. I suppose we need a fire lit under us occasionally to get us moving; still, it'd be nice if Norm would offer more suggestions and fewer warnings, ya know?

From the Down Under Defense Expert (DUDE), a little humorous lesson on "things not to do."

My buddy Dar sat for a good interview on the origins of Science Cheerleader. Dar picked on her posture, I was ready to pick on the interviewer: for gosh sakes, if you're interested in your subject, put some effort into showing it! And if you're not interested in your subject, work doubly hard--or change your line of work. Or something. The interview is good from a content standpoint, as I learned a little bit more of the background to this epic I've signed up to do paperwork for, but sheesh, that interviewer could stand to learn a few things.

From Father Dan: a video about...Lala the Penguin? Yep. Also, an elderly married couple who've still "got it."

Here's something else that made me smile, though inexplicably: Sad Star Trek.

From Lin:
A blog by someone who didn't last very long as a food critic. A pity, really, but the writing is hilarioius.

Some of the usual back-and-forth continues in Chicago, as airlines that stand to benefit (in the long run) from an expansion at O'Hare International Airport are suing the city because they're trying to start funding and building NOW, when the economy sucks and no one's got any money. Bottom line? My guess: all the expenses, from construction to legal fees, will end up being paid in large part by those of us foolish or unlucky enough to have to travel through ORD.

I've probably posted this before, but it's still cool: a TED talk translated into a cartoon; this one is on where ideas come from.

From Martin, this is reportedly a good site on space exploration. Gotta confess, I haven't found time to visit it yet. There was a time when I did stuff for fun, not because it was my job or some sort of compulsion.

A rabbi on Sarah Palin and “blood libel.”

From Dar, a suggested method of clearing the system. Hm. Sounds like a science project...not something I'm going to try while I'm in the middle of running a conference.

From BoingBoing.net, Engadget, and other places:
This T-shirt crystallizes my thoughts on 2010 rather well: 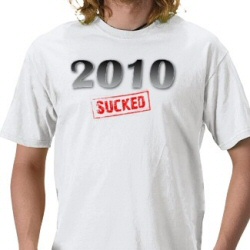 From my NASA PAO feed: a story that the Fermi Space Telescope has detected antimatter over thunderstorms on Earth. And you wonder why you should be careful around lightning? SHAZAAAAM!!

On the NASA front, there are more layoffs coming, but you have to dig about three paragraphs into this story to learn that...and really, who has time to do that anymore?

So this TSA agent got convicted of planting some sort of malware into the administration's computer system. No telling what the malware DID or WILL DO, however...

My grandparents were Depression-era people, and they still advised me to buy stocks because they believed in the long-term growth of the United States. Younger folks’ pessimism is foolish, short-term and long-term because “buy low, sell high” has been an investment rule since stocks were first sold. And, again thinking long-term, you don't get a prosperous society by depending on the government to "create" prosperity. You get long-term prosperity when the government gets out of the way well enough that private individuals and companies can start enterprises that make a profit and create jobs. Do they teach that anymore?

Avoiding writer’s block by stopping while you’re ahead.Something fun for a change to end this segment: Disney short subject on musical instruments. This is actually really cool.


A skull made out of McDonald’s fries. Why?

Confessions of a Walt Disney World cast member (not me, I hasten to add: I wouldn't be stupid enough to say this sort of stuff on the internet).

A friend found a shirt that conveys my mixed duties at Science Cheerleader: half gofer (gopher), half ninja.