Bart Leahy, Retired Conference Chair
So my three-year project is now finished. ISDC 2011, four and a half days of very hard but good work, is now over. I'm still a little fuzzy around the edges, having averaged 6 hours of sleep per night and 18 hours of work per day. Mind you, others got a lot less sleep (what IS it with IT guys that they insist on going 2-3 days without?), but it'll probably take a couple more days for my middle-aged body to recover.

But again: what great work! Consider: 857 registrants (budgeted: 400), around 20 companies and organizations in the exhibit hall, over 350 attendees at the job fair, maybe 100 total at the open-to-the-public author tracks.

My team of volunteers and NSS staffers did a fantastic job. No major hiccups, not a lot of complaints, lots of good things said. Eventually I became invisible, the operation became essentially frictionless, and attendees were free to focus on the content. And what, exactly, WAS the content? We were busy (perhaps too busy--I got a couple complaints about too many tracks, but nothing too fierce). The sessions I did see were at meals: Thursday dinner (Rick Tumlinson), Friday dinner (Robert Bigelow), and Sunday lunch (Deborah Barnhart). Rick was offering up his vision of humanity's vision in space. Bigelow was talking about his company's new inflatable space station designs. Barnhart was speaking about the future of the U.S. Space & Rocket Center. 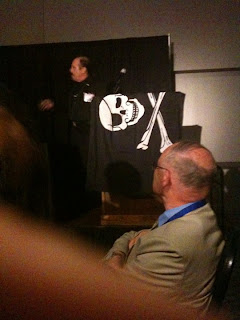 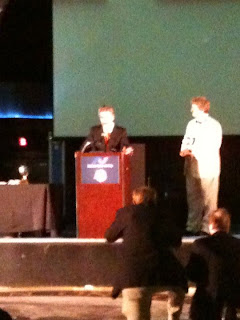 I didn't see much of my own conference, truth be told, but then I expected that. I was running around a lot, moving stuff around, calling in audio-visual requests, and addressing minor room furniture changes. It's rather like working at Disney World (oddly enough). Any time I paused long enough to relax in a function room and watch some presentation, I'd get a phone call, so eventually I just took in my pauses with my team somewhere. It got embarrassing hearing people say I was doing a good job when I started feeling seriously useless around day three. One of the attendees offered up a useful analogy: "The most important job in the Army is the guy who stocks the toilet paper. If you're doing your job right, you're invisible and no one notices; but if you're not doing your job, all hell breaks loose."

In any case, if good leadership involves recruiting good people and staying out of the way when they're doing fine (and it does, in my world), then I'll accept the compliment. I've got a lot of self-sufficient friends, and that means they take initiative within reason before asking for help. The F.O.B.s and F.O.Y.s (Friends of Bart and Friends of Yohon) are a great bunch of people; they made my job easier and made me and Huntsville look good. SAAAAA-lute!

My favorite story from the conference has to be the luncheon on the last day. I was Master of Ceremonies, and things proceeded as normal until I was working on closing remarks. Debbie, the Media Queen, was reading off a list of people who had contributed to our silent auction (half the proceeds to go to NSS, half to go to the Red Cross of Madision County for tornado relief). Suddenly, Yohon is signalling me from stage left. He's whispering, "We've got a problem: we've got tornado sirens going off." I kept my expression unchanged or put on a Disney Smile and asked, "So, what?"

"We need to keep people here."

I nodded, returned to the microphone. "Folks, as much as I'd like to tell you I was joking, I'm afraid there are tornado sirens going off outside. We've been told to stay here."

Back at the mike, I said, "Okay, folks, I was wrong. We need to follow the staff in an orderly fashion. We'll be going toward the basement. Thanks for coming to ISDC!"

And off the crowd went, moving in that aforementioned orderly fashion toward the door. Before I could retreat, an older couple oddly asked me to take their picture in front of the podium, which had the NSS and ISDC logos on it. Then off we went.

When I got downstairs, I heard, incongruously, a piano playing. Robert, one of my volunteers, had found one among the other stuff in the basement, and started playing show tunes. Very, very well. 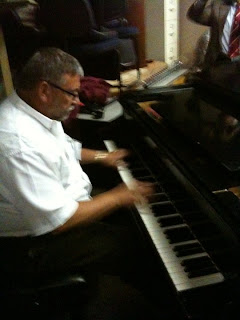 It was magic, of a sort. It set people at ease, and the mostly uncertain atmosphere became more like a cocktail party (one of my friends suggested opening up a bar). People were texting, taking pictures, and making movies with their various electronic devices, and the time passed convivially until the all-clear sounded and the staff told us it was safe to come out of the shelter.
If I learned anything from this conference about leadership, it was "Never let them see you stress." Sweating is fine, if you're looking busy. Look worried, and that worry spreads like gossip or illness. I wish I'd internalized that lesson earlier, but it really took until I was sure we had all our major program components in place before I was comfortable enough to re-install my "Disney software." It's the sort of software that allows a high-strung guy like me take a little time to lighten up and wonder jokingly if I've lost my marbles. 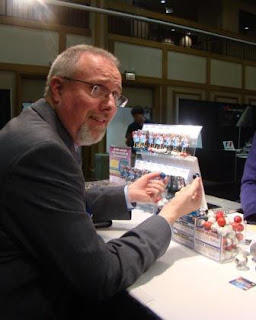 So I put on the new power suits (and the tuxedo on Friday) and did my Disney thing. It worked, so what the heck.
Eventually I'm going to write a book or a few blogs about nonprofit event management since most of what I learned was under fire. Reading "lessons learned" about the details from previous conferences does little good if you're still struggling with the basics. So expect more thoughts when I'm more fully awake.
In the meantime, I can rest easy for a few days (before I go back to supporting Science Cheerleader), happy and satisfied with a job well done. If I'm going to be a one-time ISDC Chairman (my signature block now reads "ISDC 2011 Chairman (Retired)), I might as well go out on top of my game.
Peace,
/b
Posted by Bart at 9:27 PM

Very nice piece! It was a pleasure and an honor to work so closely with you. I look forward to a long and strong friendship.

Really great conference ...as good as Boston or Chicago stuff. Caught up with a lot of folks I hadn't seen in YEARS and made some good contacts. ...kinda disappointed that there were no Star Trek uniforms though.