I'll talk about the horrific events surrounding the movie's premiere another time. I need a little time to process that first. Right now, since I just saw the film, I'll take it on as a work of cinema first. 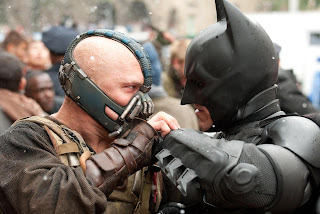 What does one say about Christopher Nolan's third Batman film? Well, it lives up to the tone of the other movies in the series: it's violent, it's loud, it's dark, it's brooding, it's the whole Batman schtick as writ for the 21st century.

Okay, so what's the story? Well, we start with a James Bond type of opening and a new bad guy getting loose--Bane. And who's that? Well, Rush Limbaugh's claims to the contrary, he was not an invention to connect the "bad guy" with Mitt Romney--"Bain Capital," get it?--Bane (as in the bane of your existence) was created and named in the early '90s. Read enough comic books, as I do, and you learn a few things. Anyhow, Bane the bad guy is bald, muscular, and wears a Darth Vader-type breathing mask that gives him a voice that is utterly incoherent about 50 percent of the time. Drove me crazy. Bane and his thugs start letting loose on a Gotham City that had been relatively pacified and Batman-free for eight years. Batman has been missing since the death of Harvey Dent and the anti-crime act that bears Dent's name--the events of The Dark Knight. Bruce Wayne is a recluse and the people and organization around him are falling into disarray. All it takes, of course, is for a serious bad guy or two to appear and Wayne decides to resume his role as the Caped Crusader. And then, as my pal Widge would say, hijinks ensue.

This movie is a graphic novel writ large, as are the other two Nolan Batman stories. By the way, if you're not a comic book fan and are wondering what the heck a "graphic novel" is, it's a high-prestige comic book, often using familiar characters, better artistic quality, and better binding. Graphic novels, as opposed to the average comics you can find on the magazine rack, are complete stories and are meant to provide Deep Insight or to deal with Serious Issues in a literary field that usually focuses on super-villains with crazy plans for screwing up the world. The Dark Knight Rises addresses serious issues while telling a Batman story: about contributing to a civil society, about trust, about alternative energy, about vicious populism against "the 1%," and yes, it's about heroes and our need for them.

Along the way, this movie features some really good characters, some familiar, some new. Familiar ones would include Christian Bale as Bruce Wayne/Batman; Michael Caine as Bruce Wayne's faithful guardian and butler Alfred; Morgan Freeman as Lucius Fox, CEO of Wayne's corporation; and Gary Oldman as Police Commissioner Gordon. New secondary characters include Joseph Gordon-Levitt (who, a friend reminded me, starred in Nolan's Inception) as a "hothead" policeman named Blake and Anne Hathaway as Selina Kyle, a.k.a., Catwoman.

This is the first time Ms. Hathaway has appeared in a movie I wanted to see, and she's just darling. Kyle/Catwoman has always been an ambivalent character in the Batman universe because she was a love interest for Batman but also a clever, witty, violent, acrobatic, and notorious kleptomaniac. Hathaway nails the character and provides a light touch this very dark film needs. Okay, and she looks great and moves gracefully in a black catsuit. 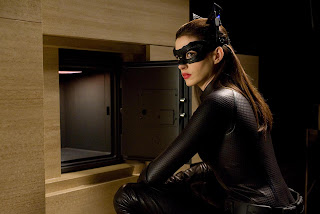 Dark Knight Rises is certainly a long movie for the genre (make all necessary stops before entering the theater because it's easy to get lost). A scrupulous editor could probably have slashed 20 minutes from the story, but then I thought the same thing about The Dark Knight. If you don't like violent, loud, complicated movies with costumed heroes and villains, this film isn't for you. If you have a problem with Michael Caine crying a lot (and yeah, one spoiler: he does), this might bother you.

All that said, for me this was mostly a fun film, and it ends well. What more do you want from a superhero movie?

[Oh yeah, speaking of which: the trailer for the reboot of Superman, Man of Steel, was shown prior to this movie. Looking forward to that!]
Posted by Bart at 9:48 PM