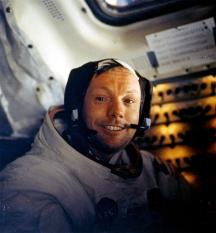 The first human being to walk on another world has passed away today. He was a quiet man, a solid test pilot, an accomplished astronaut, and a man of few words, before and after his famous flight. However, he did manage to misspeak a few words that will outlive us all, outlive this century, and I think live last as long as human beings have a history worth writing as he set foot on the Moon: "That's one small step for [a] man, one giant leap for mankind." As a friend put it, the world is now poorer without him. His family's statement speaks of his modesty and dedication to public service and hard work, suggesting that those serve as his legacy as a man, not just the moon landing. I concur.

I first heard the words when I was seven years old, maybe younger. The words moved me in a way that was deep for a kid, combining in one moment a supreme act of achievement, exploration, and patriotism that still thrills me when I hear them. I didn't get inspired to become an astronaut or become a scientist, or even a pilot. Nevertheless, the words spoke to me, telling me space exploration was something great, something worth doing. I wanted to hear more words like that. For those words, I will forever thank Neil Armstrong. Rest in peace, sir. You will forever be a part of history.
Posted by Bart at 5:28 PM