The Enticement of What is Forbidden

Over the years, I've heard a lot about how we shouldn't try to prevent kids from watching violent movies, having sex, or taking drugs because--human nature being what it is--kids will be more enticed to do something just because it's forbidden. I find it curious, then, that some folks react with such shock, anger, and dismay when similar bans are put on the purchase of personal weapons.

Let me start by laying out my experience with or interest in guns: up until a few hours ago, it was zero. I hadn't fired anything more vicious than a pump-action BB gun when I was 17 and the occasional Nerf dart gun up until, say, last week. but handguns of the made-to-kill variety? Never touched the stuff. Rifles, shotguns, repeating rifles? Likewise. Wasn't interested.

Then the government and some activists started getting a little too aggressive about wanting to curtail a clearly stated right in the U.S. Constitution. And yes, I'm one of those people who will act contrarily, just because because I don't like to be pushed or nagged, even if it's for my own good. Think on that, anti-gun fans. Your very vehemence--your pushiness, your meddlesome behavior, and your desire to tell me what to do--got me irritated enough to ask a friend to introduce me to a gun range and firing a handgun.

So there I was: I listened seriously and carefully through my ear and eye protection to the safety briefing from the gun range supervisor. I took what pointers he could offer, and asked what questions I needed to before I picked up the heavy black metal thing and fired 50 feet down a shell-littered concrete floor at a piece of paper mounted to an adjustable cardboard target. My hands shook so badly through the first magazine that if half my bullets hit the 7X9" paper, I'd be most surprised (nervousness combined with an essential tremor--a great combination). Even through the thick ear protection, I was startled by the noise and explosive force of the weapon (I'd rented a Glock .45 automatic). Nevertheless, after the first magazine, I understood more or less what I was doing, and started hitting the target often enough not to feel too embarrassed. 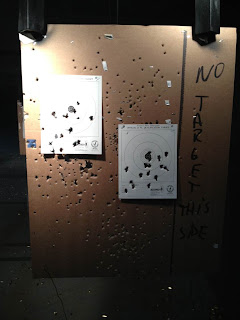 You professionals, go ahead and laugh. This was a first-time outing by a 43-year-old with glasses and shaky hands. Let me also point out that I was not the first one to fire at the cardboard--it had been there a while. I fired about three magazines' worth--36-42 bullets, depending on how well I shoved in the casings, which wasn't that efficiently.

I also fired my friend's 1911 Model .45 pistol and the six of us (the outing increased in size as word got around) took turns firing a rented Beretta at extreme range. Eventually I steadied down a bit and was able to understand what I was doing, even if I wasn't particularly skilled at doing it.

Here's what I came away with after that 90 minutes at the range:
So there you go: I tried something dangerous and new, not because I particularly wanted to, but simply because some people wanted to take away my ability to even make the choice.
Posted by Bart at 9:32 PM