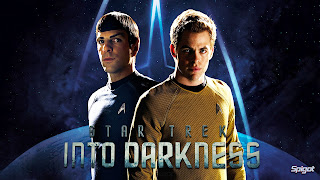 No promises on whether I'll share "spoilers" or not. The risk is up to you.

Short version: Yes, the new Star Trek is as fun and action-packed as the first JJ Abrams movie. No, I'm not embracing the movie fully because it lacks the maturity of the TV series and other films.

If you want more of my "insights," read on.

Some audiences crave "origin stories," such as the beginnings of Batman, Superman, or Robin Hood. I suppose we all like to know where heroes truly come from and what makes them who they are. Great. In my mind, that was the purpose of the first JJ Abrams outing, when he rebooted the series and (reverse spoiler here) created a timeline that completely annihilated all of the Star Trek stories seen to date except the Enterprise series.

But it's been a few years now. James T. Kirk, Mr. Spock, and the rest of the crew have had some time to grow into their roles on the flagship of the United Federation of Planets. Certainly that is enough time for Kirk to settle down a bit and--jeez, there's no other way to say this--grow up. Chris Pine is about the same age William Shatner was when he first assumed the role of Starfleet's most action-craving, hormonal starship captain. Yet he looks and acts about ten years younger. He's got all the subtlety of a phaser blast to the head ("Helloooo, ladies!"). I had a discussion with my employer about this--he taking the position that Kirk would have acted exactly this way early in his career, before he learned a little more and smoothed out some of the rough edges. I would simply say that Shatner's Kirk had a certain restraint and charm about him that Pine's Kirk lacks.

Okay, fine. But two films are enough to get the point across that before Kirk became the eminent, stolid galaxy-saver that he was in the series and the movies, he was a walking Axe commercial, punching every guy and making love to every green woman to cross his path. Eventually he grew up, mellowed out, got smarter. I think it's about time Mr. Abrams take Chris Pine's Kirk to that level. Even Spock (as portrayed by Zachary Quinto) has some unvarnished emotional outpourings that are not in keeping with the stoic we came to know through most of the Star Trek canon. Karl Urban's Dr. McCoy is all gruff and grouchiness without the gentleness of the "old country doctor" we've known. Scotty is a sarcastic smartass rather than the bookish, geeky character created by James Doohan. The characters Uhura, Sulu, and Chekov are perhaps truest to the characters created by Nichelle Nichols, George Takei, and Walter Koenig, but they all look too young to be where they are. I loved my friend Dea's comment after seeing the film: "They gave these yahoos a starship?"

Yes, I realize the characters are supposed to be younger. Yes, I realize that actors are entitled to some interpretation in their work. The problem is, we've had 40 years of the same actors portraying these characters. We have a pretty good idea of how they operate, think, and act. And yes, some of us like them that way. It's been a pleasure watching the actors (and their writers) mature and build upon the work they did for a short-lived TV series years ago. I for one am used to the older--here's that word again--more mature portrayals of the Star Trek crew. Yes, I can enjoy a few chuckles as I watch the start of Spock and McCoy's feuds or Scotty yelling that he's "givin' her all she's got," but eventually I want to see them experience new, mind-expanding adventures.

And thus I arrive, belatedly, at the plot of Star Trek: Into Darkness, which is simultaneously exciting and a narrative mess. To JJ Abrams' credit, a lot of the predicaments the Enterprise crew face are the result of the immaturity of their adrenaline junkie commanding officer, and that adrenaline-seeking captain keeps the action moving, albeit in strange directions. So what are we facing here? Random terrorism, secret plots within the Federation, journeys to distant planets, angry admirals, sexy admiral's daughters, and crashing starships. I'm not giving away much here--that's most of what's in the trailers. However, much like James Cameron's films, if you spend too much time logically analyzing the plot here, you will find yourself exclaiming, "What?!?? Did they really just do that?"

The biggest gripe I have with Into Darkness, aside from the relentless, nearly mindless brashness of Kirk, is the amount of dialogue and storytelling they lifted wholesale from previous movies or episodes. If you're going to reboot a beloved series, the idea should be to take it in new directions, not rehash old material with additional stunts or effects. We've now had one film that set the new stage and one film that rehashed old material. It's time to take this younger version of the familiar crew on a new adventure that grows the characters and the series. Throw in a social message, an intellectual puzzle, a story with emotional resonance, a mind-blowing science fictional concept, or all of the above. Kirk was not just an action hero, and Star Trek was not just an action-adventure series. It's time that we saw that.
Posted by Bart at 9:49 PM

Here is my take, sir. Yes both versions of Kirk assumed command of the Enterprise at the same age but here is the one thing that I think is the difference. Shatner's Kirk went through the academy most likely between the ages of 18 and 22. He graduated served on a variety of ships and worked his way up to the Enterprise; in other words, he earned it the old fashion way. Whereas, Pine's Kirk entered the academy around the age of 25 or 26 and was given the Enterprise as a prize; he never had the chance to make the mistakes that junior officers make in their early careers. I think this speaks to the maturity level of Pine's Kirk.

When there's not action going on, the movie is still a lot of fun to watch. That’s just how Abrams rolls, and it totally works for the guy and the movie. Nice review Bart.