A Few Thoughts on Beverage Snobbery 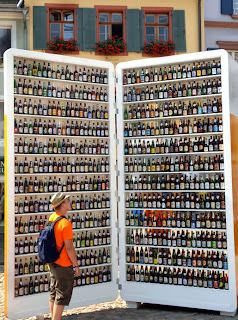 I'm about to irritate my friends who brew beer at home or prefer high-octane "craft" microbrews, and I apologize. You guys make some interesting, high-quality beverages. The names alone are amusing, and the types and flavors range from light lagers to seriously dark porters, doppelbocks, and stouts. They are interesting for sampling purposes, but if I'm going to be at a ball game or picnic out in the hot sun for a few hours, quite frankly I'd just like a Budweiser.

Finished grousing about my horrid taste in beer? Great. Beer, to me, is a pedestrian form of alcohol, used in pedestrian, low-stress environments, such as the above-noted picnics or ball games. I never understood the need or desire to make beer "upscale," nor the need to up the alcohol to 8-10%.

Beer, for me, is a thirst-quenching form of alcoholic beverage. I like the flavor, but I don't really need to pay that much attention to it. I think the first non-amber-colored beer I had was Killian's Red, and that was sometime in the '90s. I tried tasting some of the more exotic beverages when I moved to the DC area and pedestrian beers were hard to come by (the most common mass-produced beer on tap there is Sam Adams). A lot of them I was either allergic to (hefe weissesn, Belgian, and wheat beers) or they upset my stomach (Imperial Pale Ales, porters). So I went back to basics. I will enjoy an English brown ale now and then (Fuller's London Pride or ESB being my favorites) or the occasional Harp or Guinness. But really, I like my beer simple and boring.

I guess the point is that I've given up on beverage snobbery. My taste in beer (according to the aficionados) is appalling and pedestrian. Fine. I like a simple beer.

My taste in wine often has a great deal to do with how much money I have at the time. Case in point: that same store in Alexandria, VA, that sold all the high-end beers also sold a variety of high-end wines. Occasionally I'd treat myself to one of their rather pricey bottles. I shopped there often enough that one or two of the cashiers recognized me. One in particular asked what I was going to do with the bottle of Beaujolais Nouveau. I explained that I planned on making a sangria with it, to which she replied, "That's all it's good for." And what would she have said if I'd planned on just drinking it with dinner? One Christmas I got a coupon for 10% off a case of wine. I thought, what the heck, just got a bonus, live large! This same cashier, knowing my shopping habits, said, in a not particularly kind tone, "You do know that's for 10 percent off a case, right?" As if I couldn't read or couldn't afford it if I could. Really now. Get over yourself, Ms. Cashier.

I can't recall encountering a whole lot of snobbery among drinkers of whiskey, but there is some. For flavor, I happen to like Jim Beam Red Stag. However, my go-to guy for advice on the beverage thinks it's garbage. Another friend and I enjoy Jim Beam Devil's Cut, which is another mass-produced brand. It appears that if you are confident to walk into a place and order an expensive name-brand glass of whiskey, no one is going to argue with your taste. However, don't order from the well drinks. That's a social no-no.

And on and on it goes. As people concentrate their creativity on anything from flower-growing to raising vegetables to making beverages, some learn and develop better methods than others. And as consumers likewise consume on these products, they come to develop their own vocabulary for defining what differentiates "the good stuff" from the rest. I have no problem with this expertise and in fact I rely on it when I'm looking for recommendations. Occasionally, the beer/wine/whiskey snob attitude gets to be a bit much. And yes, I've had to learn to rein in my own attitudes, as I've got friends who prefer boxed wine or "wine with a retail value no higher than $10."

This whole line of thought came to me yesterday. A lady in the snooty grocery store near me was looking at the wine shelves in fear and dismay. She was having a steak dinner with her husband and informed me that she hadn't had wine in 20 years. "It's gotten overwhelming," she said, and asked me for help. I pointed her to a mass-produced Merlot (Barefoot--I had the same brand in my fridge) and wished her well. It was low-cost, had a decent enough flavor, and wasn't overly "crafty." And, like I said, I had some at home myself. I suppose, given the "special occasion," I could have steered her toward something pricier, but 1) I didn't work at the store, and 2) I figured if you're just introducing yourself to wine, you're better off starting inexpensively and working your way up. Hopefully she and her husband had a nice evening.

I thought about her actual fear afterward. Beverage snobbery can be so bad, it seems, that a person new to experience might fear being embarrassed at the checkout counter because they bought the "wrong" brand. Such intimidation is unnecessary. As someone informed me when I first started trying to broaden my palette, "The best wine is the one that's right for you." And on that note, I just realized I'm out of Budweiser. Have a splendid day!
Posted by Bart at 9:13 AM