Busy Day in the Life of a Middle-Aged Geek

So today began with some quality time helping clean up my church. This was followed by a VERY long day helping the Huntsville Alabama L5 (HAL5) Society set up for a rocket motor firing test. This was a big deal, because we haven't had a live firing test in over a year and because the last two motors blew up.

HAL5, I should explain, is the local chapter of the National Space Society, and has been the incubating organization for several new ventures, including HARC and Orion Propulsion, the latter of which was founded by Tim Pickens, who was chief propulsion engineer for SpaceShipOne. In other words, this is a group of serious rocket enthusiasts who just happen to turn their hobby into reality. Aside from helping with publicity on occasion or small, non-technical tasks on the rocket motor ("C'mere and do this; you can't possibly screw it up"), I take no credit for their successes. It's just a fun group to be around.

First, I'll take a moment to describe the motor, which is a nitrous oxide/HTPB (industrial rubber) hybrid. The motor--an "engine," the English major was informed, has moving parts, motors do not--is about 30 inches long and 4 inches in diameter. Obviously there's more to it than that, but why mess with ITAR, right? 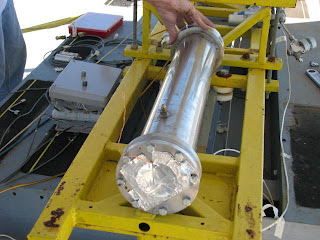 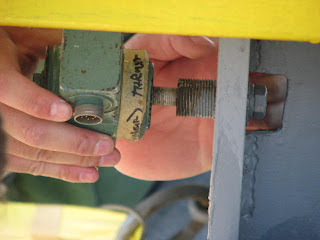 A static rocket motor test involves securing the motor to a firm horizontal surface (test stand). The motor has the HTPB; nitrous is provided by tanks attached to the test stand and fed to the motor through "plumbing." The bulk of the setup time is spent setting up the remote actuators that control the various valves for the nitrous tank; the rest of the time is taken up by "instrumentation," in this case strain gages, which measure how much pressure the motor is experiencing during firing, and load cells, which measure how much thrust the motor is generating.

Because we'd had two motors blow up on us (one of them 1.5 seconds after ignition), we used a "battleship" motor, which is made of very thick, heavy material to prevent an eruption. It won't fly, but it shouldn't shatter, either.

I did make one "useful" run during the day, when I wasn't laying cables or tightening bolts on the test stand: I went to Wal-Mart for bottled water (for the group--Disney taught me well), rags, cookies, and ear plugs, all of which were necessary.

You might have seen a Space Shuttle launch on TV or been lucky enough to go to Florida and see one first-hand. Let me confess here that our motor firing is nowhere near as majestic a sight. However, it does offer something your typical Shuttle launch does not, and that is immediacy. We stand behind a steel-reinforced cargo container, inside a semitrailer that doubles as "mission control," or out in the fields a hundred yards off. And brother, it is STILL loud!

I've heard rocket motor firings described as "white noise." Another description might be that of a long-drawn-out roar of flame. For me, the best way to describe the blast of sound is like having a trumpet belt out a high F from a rock concert speaker directly in your ear, and then sustaining that sound for five to 20 seconds. The flame itself is bright yellow, starting out as a cylinder directly out of the nozzle, widening slightly as it expands into the air, and the gradually tapering into a narrow, thin tail about 20 feet behind the test stand. The sound comes on suddenly, and it can either shake the ground or your nerves (I must suspect the latter, given my inability to keep my camera centered). And then suddenly, it is over--like you've been standing beside Niagara Falls for ten seconds and then are suddenly transported to an empty desert. Boom--it's over. The only thing left is a ringing in your ears and a dirty cloud in the air behind the test stand. Pretty cool for 20 seconds' work. 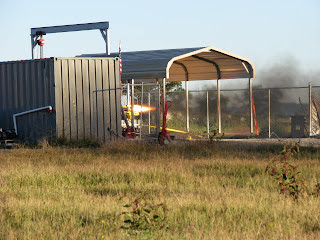 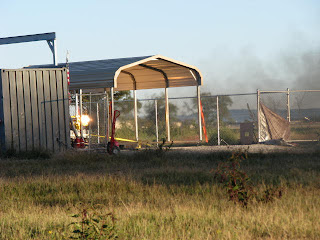 And the good news for this firing was that our motor lasted 18 seconds or so. It might have gone the full, planned 20 seconds, but our chief engineer was detecting some instability in the combustion, either because we were running low on propellant or the combustion itself was failing. In any case, no one complained, and I distinctly heard a "Yaa-HOO!" from one of our normally unflappable engineers.

When the nitrous tanks had been safed and we could approach the motor, the nozzle was still smoking and the casing oven-hot. Lots of beaming smiles all around, as the group finally had its first successful firing in nearly two years. Even as wires and tubes were being disconnected, someone asked eagerly, "Okay, which motor do we test next?" The sun was nearly set by this point, but we decided to hurry up, detach the battleship motor and attach the flight-weight motor. Setup is relatively easy after all the valves and data collection wires are hooked up. 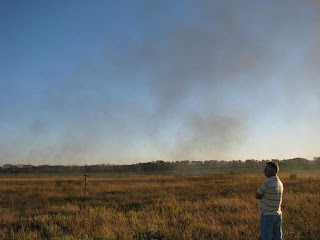 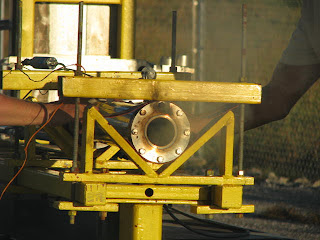 Sunset came and went, flashlights were quickly replaced by driving up someone's car to illuminate the area. The nitrous piping was running fine, and even the instrumentation was functioning fine. It was the igniter that gave the group fits. Three or four shouts of "Five...four..." were followed by thirty seconds of absolute, baffling silence. After the fourth igniter failed, we gave it up, purged the tanks, and called it a day. "The squibs were just no damn good," our chief engineer muttered in disgust. Perhaps we'll try again tomorrow, perhaps not. Most of the group is married now (as opposed to ten years ago, when they were just starting out on this rocket-building adventure), and spouses are only so forgiving toward loud and balky machinery.

I'll try to repost this report with pictures tomorrow, if Blogspot doesn't burp again. Right now I'm exhausted and ready for some down time. But that, dear readers, is what it's like to be a serious rocket geek in these United States.
Posted by Bart at 9:12 PM