OmegaCon Pictures and Comments, Day One

I spent the weekend at OmegaCon in Birmingham, Alabama. Overall, I'd say I had a good time. However, it's been 16 years since I attended a sci-fi convention. I'm more at home with the space advocates now, I suppose. SF is what got me into space advocacy, of course, but somewhere along the line I made the transition from SF fan to advocate. I wanted things to happen in space now, and I wanted to be a part of it.

For those who have never attended an SF con, understand that SF is a rather "big tent," encompassing as it does hard science fiction (what most people think of when they hear the label and say "I don't like that"); space opera (things like Star Trek and Star Wars, which are space opera, not science fiction); fantasy (Lord of the Rings, Harry Potter, and a variety of swords-and-sorcery epics); horror; paranormal studies (ghosts and spirtualism; role-playing games (RPGs) based on existing or completely new SF/fantasy worlds; American comic books like Batman, Superman, Spider-Man, etc., and Japanese anime.

When you go to a con, you have to be in a receptive and reasonably bright frame of mind because the audience tends to be very bright, very creative, sometimes introverted, and often not supreme examples of physical magnificence (I place myself in this category as well). The costuming is often the most entertaining aspect of a con, so those are the pictures I captured most often. And so, on with the show. What I'll do here is run Day 1, Day 2, and Day 3 pictures, and then a fourth entry on my concluding thoughts from the con, as I did go there with a few specific tasks in mind.

This was my first encounter with a costumed fan: a Stormtrooper in a kilt. 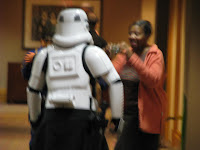 The dealers' room (sometimes called the hawkers' room) is where you can find SF book and prop vendors, as well as celebrities who are there as guests and sometimes there to hawk their latest project or movie. Richard Kiel, whom I remember best as Jaws in some of the Roger Moore James Bond films, was there, as was Richard Hatch, who starred in the original Battlestar Galactica and has a recurring role in the new version. Hatch was selling a new RPG. I didn't get his picture because I must confess to not being THAT big a fan. I did plunk down a twenty to get Chase Masterson's autograph. I liked her from Star Trek: Deep Space Nine, and she's now got a role in the fan-made Trek movie, Of Gods and Men. I also got the autograph because she's just plain gorgeous. More on Ms. Masterson later. 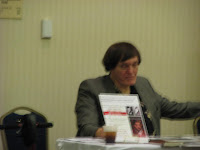 Here's a superhero you don't see very often: The Phantom, which was a pretty decent comic book that nearly got killed by Billy Zane's godawful acting in the live-action movie. You don't realize how bizarre some of these outfits are until you see them face to face. Mind you, this guy did a good job with it, but you've got to wonder what the original creators were thinking when they first came up with this getup. 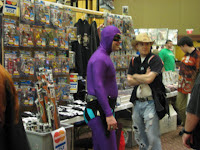 The dealers' room is also a great place for buying supplies for RPGs, like Star Wars. 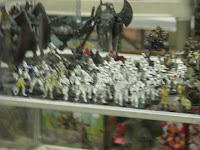 I have no idea what these two dolls in the middle were, but they were creeping me out. 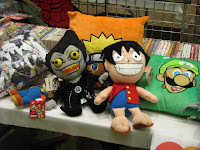 Another superhero among the stacks: Green Lantern. This guy got interviewed by the local Fox News affiliate. 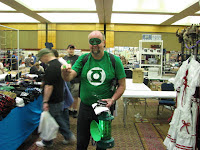 The hawkers' room is also a good place for the weapons fetishist. The two weapons below were the most ornate that I saw. I'm sure they help make particular costumes more complete; I just have no idea which ones. 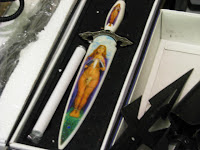 And, of course, what con would be complete without a light saber? 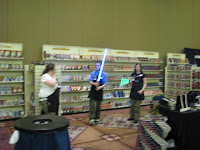 Outside the hawkers' room, this gent was part of the group Starship Lexington, which is also producing fan films on the Internet. 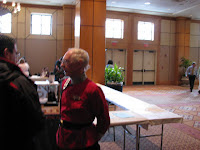 As a fan of Firefly, I couldn't resist talking to the kids at the Dixie Browncoats table. There they were selling a couple of Hawaiian shirts, a common costume item for the Firefly's pilot, Wash. The first time we saw Wash in the show, he's playing with his toy dinosaurs, which he keeps by the helm. The back-and-forth of Wash's play is worth repeating, or the next picture will make no damn sense whatsoever.

Dinosaur 1: (Calm, somber voice) "This is a good land, and we shall call it...This Land."
Dinosaur 2: (Nasty voice) "I think we should call it your grave."
Dinosaur 1: "Ah! Curse your sudden but inevitable betrayal!" Wash then sets Dinosaur 2 on Dinosaur 1, with the betraying dinosaur making growling sounds and Dinosaur 1 bellowing, "Oh, dear God!" (Another attack.) "Oh, dear God in Heaven!" All the time, Wash's voice doesn't waver from its sonorous calm. At this point the toy dinosaur melee is broken up by actual ship's business. This is just one of the quirky little bits that made the show so damned entertaining.
Anyhow, Wash, in addition to playing with dinosaurs, wears these loud shirts. The Dixie Browncoats had "Curse your sudden but inevitable betrayal" imprinted on the front and an image of a dinosaur head imprinted on the back. I had cash in my wallet, and an evil urge to spend it and so, yes, the inevitable happened... 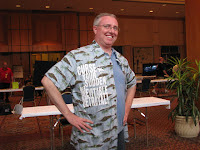 Some costumes are harder to explain in a science fictional context, like the numerous pirates walking about. This young lady did, however, have her arm festooned with a couple of small dragons, thus fitting in nicely with the fantasy motif. 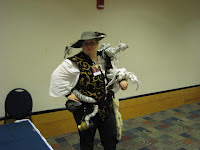 Below is one of about a dozen RPG boards set up in the RPG room. To be clear, some of these games are straightforward board games, like Axis and Allies, while some involve play-acting in connection with a variety of dice, which determine the success of various efforts. 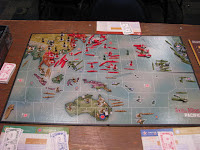 After meandering the hallways for a bit, I attened some panel sessions that were of interest to me. The lady below is Andrea Dean Van Scoyoc (http://www.thelosttheforgottenthedamned.com/), a funny but rather opinionated horror writer. She had several tales to tell about her wars with the traditional publishers, and is one of those exceptions in the business, as she managed to work her self-published stories into bestsellers--something almost unheard-of in the business. She was proving that it could be done, but it also sounded like she had fought a lot of battles and worked as hard or harder on the promotional aspects of her work as the writing itself. (And here I must confess that I haven't read her writing, so it's hard for me to judge that specific point.) All I'd say is that if I ever get the urge to get something written, I'll try the traditional route of submit-wait-submit-again until I get fed up. At which point I might end up following Van Scoyoc's path as well. 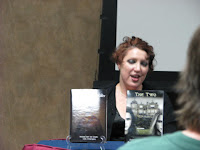 Another pirate. No dragons to be found, she was just too cute not to photograph. 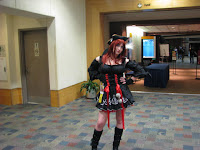 These two dudes were members of a band called Coyote Run. Their outfits consisted primarily of leather and kilts. I asked them how many competitors they had to skin to make them. They seemed to be amused. I only heard a little of their music, but it's sort of like Off Kilter, who I heard at Epcot a few times: rock 'n' roll + bagpipes. 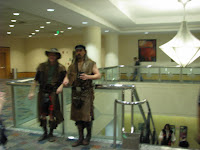 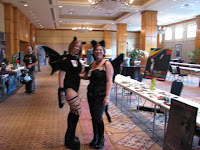 I attended a session on authors using pseudonyms. The reasons authors used them were varied and instructive. Ann Aguirre (below, left) used different names for her fantasy and romance work to keep the names' "brands" separate. Why? Because often readers have a mental block about a particular writer changing genres, so it's just easier to just use a different name (imagine, for example, finding your favorite romance writer's name on the mystery shelf, taking the book home, and discovering that s/he had written a hack-and-slash serial killer novel). Mike Resnick, a Hugo- and Nebula-award-winning author (below, right), has written something like 300 books, 150 of them under a pseudonym of one sort or another. He says he finally stopped using pseudonyms when he started writing stuff he didn't mind other people reading under his own name. Other famous authors have used pen names while learning their craft (Robert Silverberg and Harlan Ellison are two of my favorites). Silverberg, for example, once filled an entire magazine with his stories, but used half a dozen pen names so that all the stories weren't "his." 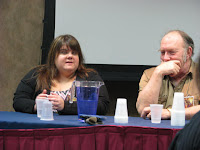 Returning to the subject of Chase Masterson, she was promoting a new indie SF film she was starring in called Yesterday Was a Lie. Friday night, she, the director James Kerwin, and her costars Peter Mayhew (better known as Chewbacca) and John Newton (who has been a regular on shows like Melrose Place and Superboy) were there to talk with SF fans about the movie without any of us seeing the film. Mind you, they did have a preview to show us, which they cued up after some difficulty. After 10:30 at night, I have to confess that my level of patience was pretty low. However, I was sufficiently intrigued by the concept that I was determined to show up. A science fiction film noir? How often do you see that? More on the film in the Day Two summary. But suffice to say here that I'm glad I took the time to see it. 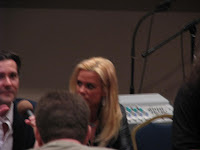 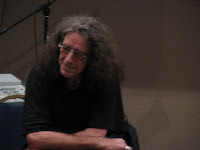 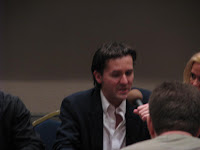 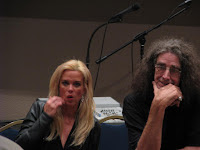 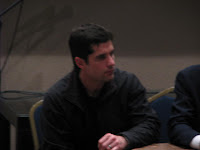