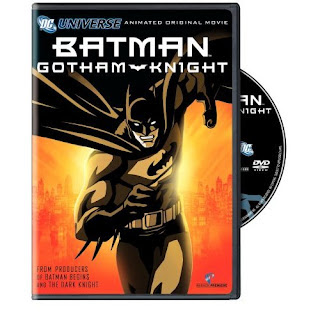 As I noted in an earlier posting, my purchase of Gotham Knight was delayed because Barnes & Noble had sold out of it. However, when I returned today, the movie was back in stock. Shazaam! Whups, wrong hero. Anyway, as might be guessed, Gotham Knight is a Batman tale. More to the point, this direct-to-DVD animated movie is a series of six Batman tales, all loosely connected by characters, if not theme or style.

I must confess to being a Bat-fan from way back, probably back when the old Adam West TV show was in its first or second syndication run. Bats was cool and more easily understandable because he was human (unlike, say, Superman). He has to rely on his brains, toys, and merely human abilities to help him win the day. I thoroughly enjoyed the Tim Burton Batman movie made in 1989, as well as The Dark Knight Returns, the Frank Miller graphic novel that brought a new maturity--and violence--to the Batman. I was somewhat less thrilled with the later Burton films, which were uneven. The film with Val Kilmer was almost decent, though the movies had started heading into homoerotic even then (nipples on the Bat armor, f'r gosh sakes?!?).

The Christian Bale incarnation of Batman was again a refreshing turn in the franchise. Bruce Wayne, the millionaire playboy with serious anger issues, comes across as slightly unhinged and very dangerous. His supporting cast, bolstered by big-name actors like Gary Oldman, Michael Caine, and Morgan Freeman, showed that Hollywood was willing to treat the live-action versions of these comic-book movies seriously.

And along the way, Warner Brothers was releasing a rather stylized animated series of Batman, as well as Superman, Justice League, and other DC Comics properties. I've watched the TV series on occasion, and it's been pretty good, though more in line with the spirit of the old '60s ethos of a "clean" Batman, simple moral fables, and no killing. So what happens when the edgier Batman depicted in Batman Begins meets the Warner Bros. animated series? What you get is a set of seriously violent cartoons. Gotham Knight is not for kids. It is for people 13 and up who are a little more used to the blood-and-guts of the graphic novel world.

For the uninitiated, a "graphic novel" is a comic book that attempts to deal with more adult themes, serious crimes, serious violence, and yes, death. It is, in short, a kids' genre attempting to go legit, and it generally succeeds. The recent spate of super-hero movies is the most elaborate extreme of the graphic novel ethos: they are an attempt to treat these costumed heroes on their own terms, as if they were people, not glossy images on the cover of a comic book.

This is interesting, as the voice actors used in Gotham Knight, according to my comics-geek buddy, are the same ones used in the tamer cartoon series. While I haven't heard of Kevin Conroy, who apparently did the Batman voice for most of the animated series, Gary Dourdan, who voices one of Gotham City's detectives, is known to me as one of the impressive actors making up the original CSI. It's as if the comic book TV show has similarly reached for adulthood. Again, this is not quite for kids. We've got violence, shootings, blood, etc. I might have to re-watch it; I don't recall a lot of "language" in the stories, but the graphic nature of the stories made up for the lack of profanity.

So, what about the story? In truth, this is a series of vaguely related vignettes--days-in-the-life of Gotham City's winged vigilante--in the days after Batman Begins. I can't say for certain that there is any resolution to any of the individual episodes, or the story arc in general. But then the comic books are much like that now, too: Gothic soap operas for geeks. Much like the Animatrix cartoon, which provided some narrative side notes to The Matrix movie series, Gotham Knight seems to be more about setting up the transition between Batman Begins and The Dark Knight, coming out next week, than telling a complete story. One villain is bagged, others are let go, and one is left to wonder how much of this will play out in the new movie.

The visual experience of the six stories is something else again. The six vignettes vary greatly in animation style. The first episode looks like something out of Miyazaki's Spirited Away. Others look like the animated series. Another looks like something out of Legends of the Dark Knight. Another looks like it was all or nearly all CGI-based. The consistent voices of the voice actors give the audience cues on who is who, given the widely varying appearances of some of the characters. This DVD is interesting, if only to show the many different ways the guy in the big black bat suit can be portrayed graphically. In one, he's anything from a slithering shape-shifter to a man-sized bat; in another, he looks like an animé pretty-boy; in another, he's a lantern-jawed adult. My guess is that there are as many conceptions of Batman as there are artists willing to draw him.

Can I recommend this DVD? To Bat-fans, sure. And to people who are likely to see the new movie. Otherwise, if you're not a comic-book reader now, you might be put off by this series of episodes, especially if your primary exposure to Batman was Adam West or even Michael Keaton. The Dark Knight has finally become the character he always was: mysterious, dark, and slightly off the wall. Enjoy, but don't bring the kids.