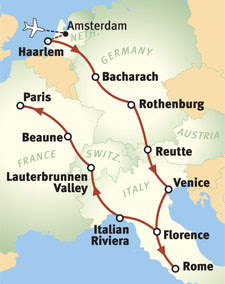 One year from today, my plane from the States will be touching down in Amsterdam to begin my three-week adventure through Western Europe. The good news is, I've taken care of some of the "big rocks" in my trip, such as settling on where I want to go, and with whom. However, there is still much to do, including:

No sweat, right? Relaxing is for quitters!