The usual mishmash of stuff from the worlds of space, philosophy, politics, management, and sheer oddness. Enjoy.

We've got Web 2.0, so what would Space 2.0 look like? This editorial in The Space Review offers some insight.

Another one from The Space Review, this one on space solar power. I get differing reactions to SSP in the space community, everything from "It'll save humanity!" to "That's an utter crock!" However, no one is saying don't try it.

I wonder what the Southern word for "chutzpah" is. Senator Bill Nelson (D-FL) has been rejecting suggestion after suggestion for the next NASA administrator; now he's complaining that the Obama administration is taking too long to nominate one. Dude, make up your mind.

The Ares Projects and Ares I-X flight test are both on Twitter now. So is the National Space Society. If you're not transmitting over multiple channels, you might be missing your audience, it seems.

Tip o' the fedor to Daphne for this one: What your boss uses to decorate the office might say a lot about him (or her).

H/T to Melissa for this: Ron Paul has a bold suggestion for clearing the pirates off the Horn of Africa: reinstitute letters of marque to anyone willing to bring 'em in dead or alive. That'll never happen, of course. Obama believes the government must do all things--subcontracting out offends him, I think. Jerry Pournelle suggests enforcing the Somalis' fishing rights off their coastal waters. Apparently the Chinese have been overfishing the area, leaving the local fishermen little to do but turn to piracy. The question, as Pournelle rightly points out, is: how far will we go to defend Somalia's fishing rights?

Could Universal Studios and Sea World team up in Orlando? Stranger things have happened, I guess.

Apparently it's getting harder and harder to screw up so badly that teachers or school administrators will fail students. An "F" was always treated as a warning shot across the bow in my family--get one on a test or some homework, and it was a sign that you needed to sit up, pay attention, and do the frickin' work! Apparently that's too traumatic. Pity.

Space.com has a story about Ares I-X. I'm always pleased to see when people get their facts right.

New from Hu: Swine flu is now a health emergency. Let's be careful out there--wash your frickin' hands, for gosh sakes! And then there was this warning that hit my inbox at work today.

Within the past week human cases of a potentially new strain of the swine influenza A (H1N1) virus infection have been identified in the U.S. and Mexico. As of April 27, there are now confirmed cases in five states (California, Texas, Kansas, Ohio, New York). Internationally, human cases of swine influenza A (H1N1) virus infection have been identified in Mexico andSpain, with testing of ill travelers from Mexico being conducted in New Zealand. The World Health Organization (WHO) is calling this "a public health emergency of international concern." The current phase of the WHO Global Influenza Preparedness is Level 3 Pandemic alert: a new influenza virus subtype is causing disease in humans, but is not yet spreading efficiently and sustainably among humans. The WHO Emergency Committee isreportedly scheduled to meet later today to consider raising the pandemic alert level.

The Centers for Disease Control and Prevention (CDC), WHO, state, and local health authorities are working closely together, increasing surveillance and assessing the potential threat to public health. Investigations are ongoing to determine the source of the infection and whether additional people have been infected with similar swine influenza viruses. The CDC has determined that the virus is contagious and is spreading from human to human but how easily the virus spreads between people is not known at this time.

We are in the very early stages of learning about this potential emerging health threat. At this time we know that this illness is the Influenza A virus and can spread from human to human through coughing or sneezing ofinfected people. It is not known how easily it spreads between people.

Symptoms
The signs and symptoms of the swine flu are similar to the symptoms ofregular human flu. The symptoms of swine flu can vary in severity from mildto severe. Symptoms include fever, body aches, sore throats, headaches, chills and coughing. Some people have also reported diarrhea and vomiting. Like human influenza, swine flu can lead to pneumonia and respiratory failure and can worsen underlying chronic medical conditions.

Spread of Infection
The main way influenza viruses are thought to spread is from person to person in respiratory droplets of coughs and sneezes. This can happen when droplets from a cough or sneeze of an infected person are propelled through the air and deposited on the mouth or nose of people nearby. Influenza viruses may also be spread when a person touches respiratory droplets onanother person or an object and then touches their own mouth or nose (orsomeone else's mouth or nose) before washing their hands. The swine flu can spread in two ways:
- Through contact with infected pigs or environments contaminated with swine flu viruses.
- Through contact with a person with swine flu.

People ill with swine influenza virus infection should be considered potentially contagious as long as they are symptomatic and up to 7 days following the onset of illness.

Seek Medical Treatment
If you become ill with influenza-like symptoms, you may want to contact yourhealth care provider. Your health care provider will determine whether influenza testing or treatment is needed. The swine flu can be treated with antiviral medicals. IF YOU ARE SICK, YOU SHOULD STAY HOME AND AVOID CONTACT WITH OTHER PEOPLE AS MUCH AS POSSIBLE TO KEEP FROM SPREADING YOUR ILLNESS TO OTHERS.

Emergency warning signs that require urgent medical attended include:
- Difficulty breathing or shortness of breath.
- Pain or pressure in the chest or abdomen.
- Sudden dizziness.
- Confusion.
- Severe or persistent vomiting.

Self Care
- Check with your health care provider about any special care you might need if you are pregnant or have a health condition such as diabetes, heart disease, asthma, or emphysema.
- Check with your health care provider about whether you should take antiviral medications.
- If influenza is confirmed by your health care provider, or if you develop signs and symptoms consistent with influenza that resolve without medical care, stay home for 7 days after the start of illness and fever are gone.
- Get plenty of rest.
- Drink clear fluids (such as water, broth, sports drinks) to keep from being dehydrated.
- Be watchful for emergency warning signs (see above) that might indicate you need to seek medical attention immediately.

Prevention
There are many things you can to do to prevent getting and spreading influenza:
- Cover your nose and mouth with a tissue when you cough or sneeze. Throw the tissue in the trash after you use it.
- Wash your hands often with soap and water, especially after you cough or sneeze. Alcohol-based hands cleaners are also effective.
- Avoid touching your eyes, nose or mouth. Germs spread that way.
- Avoid close contact with sick people.
- If you get sick, CDC recommends that you stay home from work or school and limit contact with others to keep from infecting them.

Also from Hu: This could come back to shoot you in the arse: a robotic sniper, named the Autonomous Rotorcraft Sniper System (ARSS). Sleep tight! 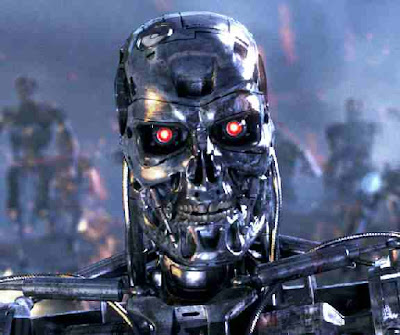