Afternoon at the Moontown Airport


My buddy Scott, who serves as one of my subject matter experts on things aviation, Navy, logistics, Special Forces, and other matters, emailed me from New Zealand a couple days ago to remind--no, order me to go to a fly-in of a Douglas DC-3 at Moontown Airport in Gurley, Alabama. I did so because I like airplanes, not out of any particular sense of obedience...I mean, Scott's 10,000 miles away or more, it's not like he's going to come after me tomorrow if he finds out I didn't go.

But the trip was, of course, worthwhile. The plane was late arriving due to rain between Huntsville and Atlanta, so I had a chance to wander around, take pictures of airplanes, talk to a couple of folks, and catch a nap before the plane finally DID show up, about 4.5 hours later than expected.


I'll start with the airport itself. Every airport has its own three- or four-character code to identify it to the International Air Transport Association (IATA). For example, ORD for Chicago O'Hare, MCO for Orlando International, HSV for Huntsville International, etc. Moontown is 3M5, which sounds like the first part of a London postal code to me, but go figure. 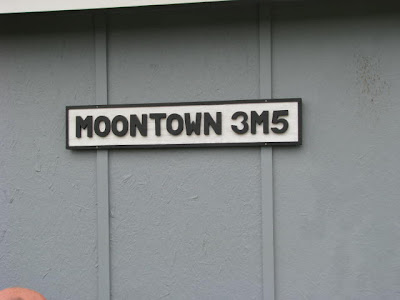 I saw a couple of cool banners hanging in the various hangars at Moontown (hereafter MT). The one here is for the 82nd Combat Air Brigade out of Fort Bragg, NC. 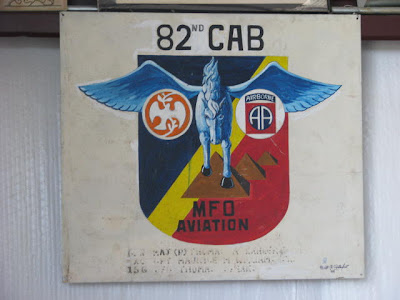 There is, apparently, a Red Star Pilots Association. Who knew? I found this flag hanging from one of the probes jutting from the forward end of a YAK-52. 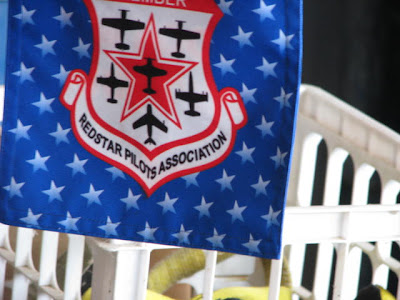 There are several golf carts at MT, one of which was imported from Thailand. 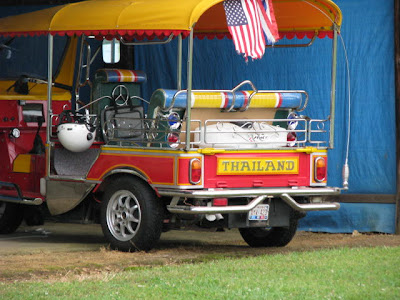 A "No Bull$#!t" sign is displayed prominently in the service building, which looks like a pilot ready room that hasn't changed in 60 years. 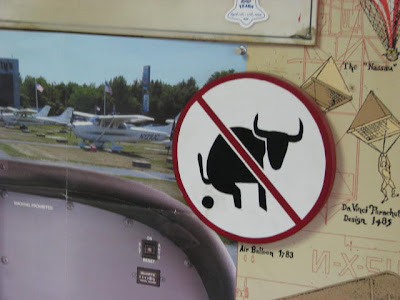 The upper part of the walls are festooned with cloth signs proclaiming pilot's first solo flights. Not sure if the cloth comes from t-shirts or what, but they had that ambience to them. 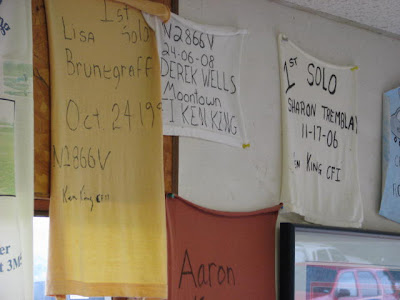 There was a flying map of the U.S. on the wall, which marks out (I believe) typical city-to-city flight paths and restricted air space (more on that a little later). 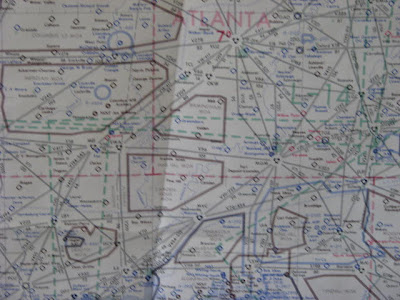 And because there is, in fact, only so much time one can spend in the ready room, I eventually wandered the hangar area to take pictures of airplanes that interested me. One plane I spotted was this gray U.S. Army scout plane. 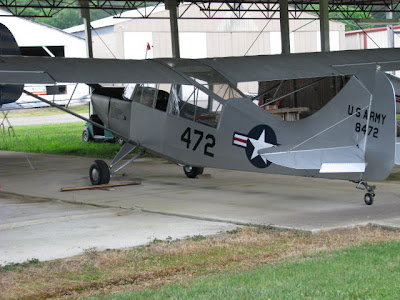 I found this sporty little model that looked like a UFO with its bubble canopy. No idea who makes it, but it looks very fun to fly. 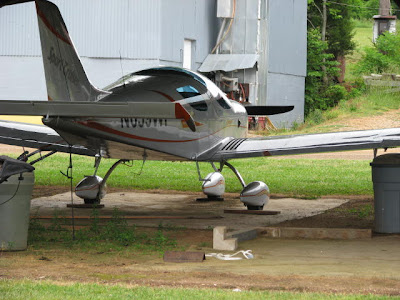 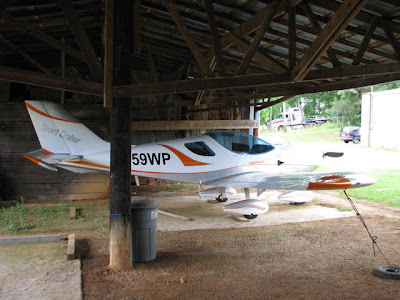 The yellow biplane below is made of composites but has a design based on the Beechcraft 17 Staggerwing. It's one of only five in the country. I saw a couple of these at an air show at Andrews Air Force Base a few years ago. Pretty aircraft. Nine-cylinder engine, 450 horsepower, seats for 6, but more comfortably seats 4. 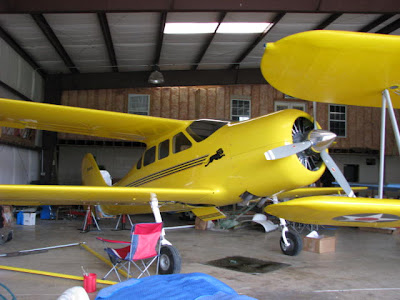 This sporty little red monoplane is a kit aircraft built by Van called the RV-3. I chatted with the owner, David E., for awhile, getting myself less stupid about private aircraft flying vs. commercial flying (which is all I've done). The RV-3 has a four-cylinder Lycoming engine capable of pushing the plane to 190 miles per hour and an altitude of 10,000 to 12,000 feet. Edgewood manages to get about 100 hours per year in her, and seems to enjoy the experience just for flying's sake. He doesn't use it for travel much.
I asked him if he'd been put under a lot of restrictions by TSA since 9/11, and he indicated that flying into regular commercial airports is not worth the hassle. However, small fields like MT were still easy to fly into and out from, with a minimum of paperwork or formality. MT doesn't even have a tower, and operates under VFR (visual flight rules) as opposed to IFR (instrument flight rules). In connection with long-distance travel, though, David was a little less positive. "A lot of us [private pilots] don't have kind things to say about our politicians these days. A lot of them are jumping at shadows." He also indicated that random TFRs (temporary flight restrictions) can pop up when you least want or expect them. Examples include keeping private planes out of areas where Air Force One is flying or near televised sports events. "Flying into DCA [Washington National] is like flying into a foreign country. And a lot of these TFRs sprout up like mushrooms for no reason. They'll be a couple thousand feet high and two or three miles out from a location."
Much to my surprise, David was not a commercial pilot or retired military pilot. He learned to fly in college and just caught the bug. He'd fly more, he said, if his wife didn't get a bad habit of being airsick. 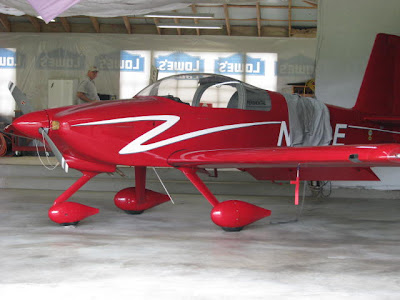 I asked about the foam chocks inside his engine inlets, which had string sticking from them, which was wrapped around the propeller. He explained that those were in there to keep birds, bugs, and other stuff out. "And when the prop turns on, they have the benefit of just flying right out." 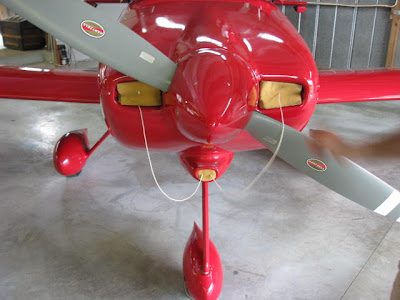 Several of the Russian YAK-52s I saw at Scottsboro a couple weeks ago are based at MT. I asked how, exactly, one acquires a Russian trainer aircraft, Czech-made or not. One young guy just shrugged and said, "Russians. They'll sell anything." 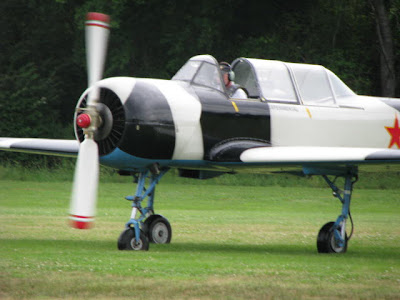 This plane just intrigued me, like the cockpit window was added as an afterthought. The name on the side was "Pawnee D," which might be the name of the plane or the name of the pilot's tribe, for all I knew. (Follow-up note: It's a Piper PA-25-235 Pawnee.) 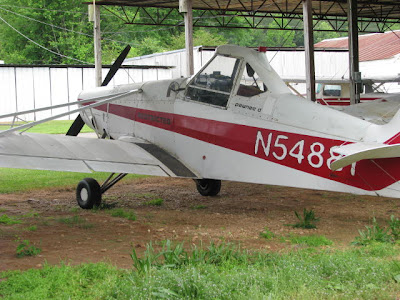 The guys there in the "tower" are most likely checking their watches. There's not much other equipment there besides a radio. 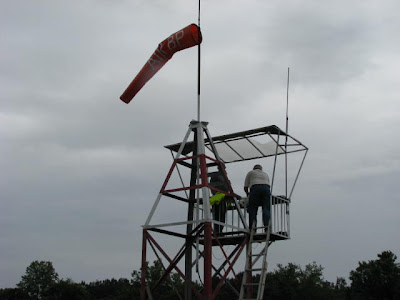 The reason I and a lot of other people were there, of course, was to see the Douglas DC-3, which got held up by rainy weather between Huntsville and Atlanta. I had enough time to finish a magazine and take a nap.
When the gray lady finally showed up, she did a couple of low passes over the field, the first one so low and close that I d@mn near dropped my camera. There are "mountains" (big, friggin' hills for anyone who's been to Colorado) past either end of the runway, so the plane came in at a bit of an angle. Must've made for an interesting time in the cockpit. 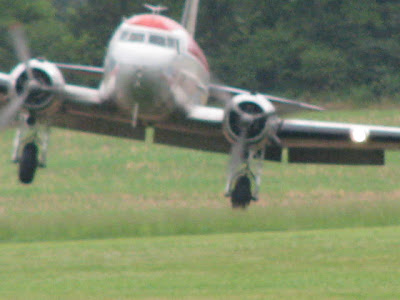 It's hard to get an appreciation for how big these things are until you see them up close, especially if you're a tourist like me who's been flying on commercial jets all his life. For example, compared to one of the last McDonnell-Douglas aircraft, the DC-10, the DC-3 looks like a little putt-putt plane. However, she compares favorably if you've spent any time in regional jets. 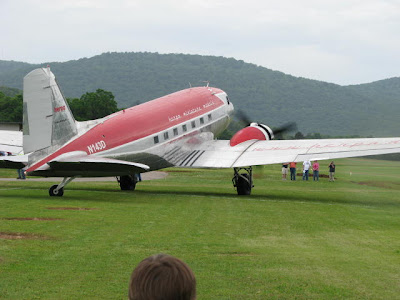 The DC-3 held a record for years as the most-produced aircraft in history, a record that I believe was finally surpassed by the 737. She was big for her day, carrying 30-35 passengers, unpressurized, and probably noisy as heck onboard, but she over 16,000 of her sisters managed to provide air transport in war and peace...and obviously still do. 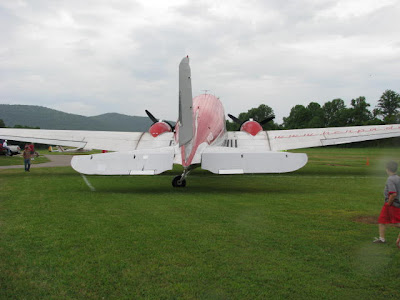 Unlike most of the commercial DC-3s, which were drafted for military service or the C-47s that were built specifically for war use, this particular aircraft did not serve in World War II. She rolled off the assembly line in 1938 and was sold to Swissair, which remained neutral throughout the war. The plane was subsequently sold to Ozark Airlines and then Academy Air before the current private owner acquired her. 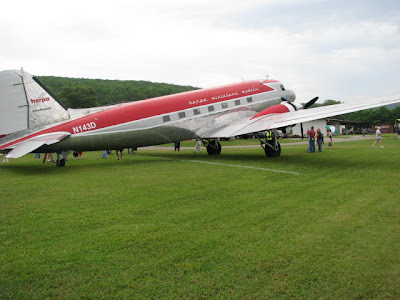 The plane is still flying with her original Pratt & Whitney Wasp piston engine, carefully maintained. Where do you find spare parts for a 70-year-old engine, anyway? 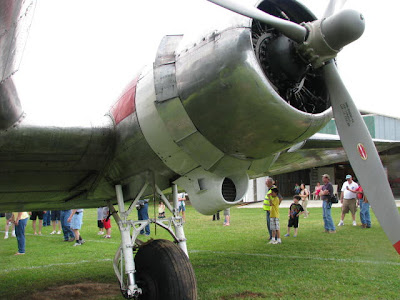 AVWeb.com has been doing a web feature on this plane. Thus the sponsorship banner on the nose. 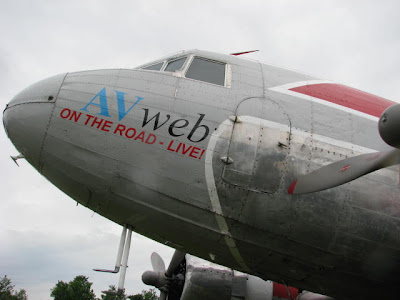 The airport operator was interviewed by AVWeb... 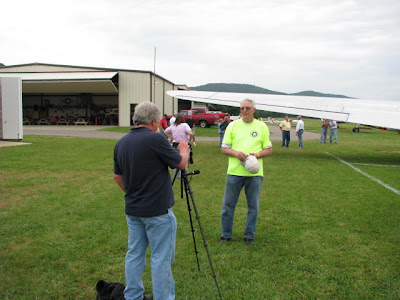 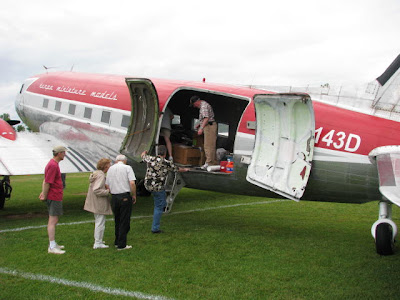 The interior ceiling was surprisingly roomy. The plane itself was a bit cluttered from the other stuff they were carrying. The four seats shown here were the only passenger seats on the plane. The rest of the interior was used for cargo. 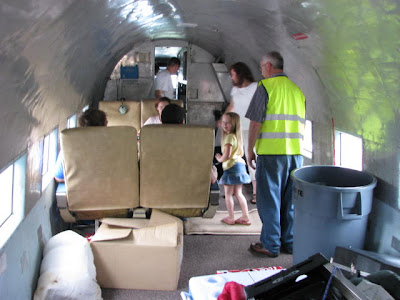 I couldn't wait to sit down in the cockpit of this baby. All of the instruments are mechanical, hydraulic, or electrical, not electronic. The pilot and copilot seats had wool seat covers. I felt like I was in the cockpit of the Millennium Falcon or something. 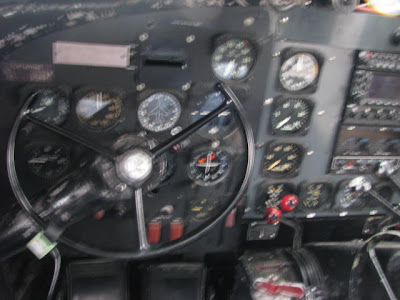 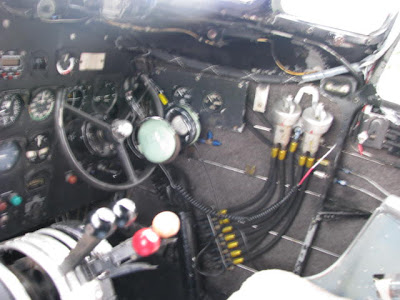 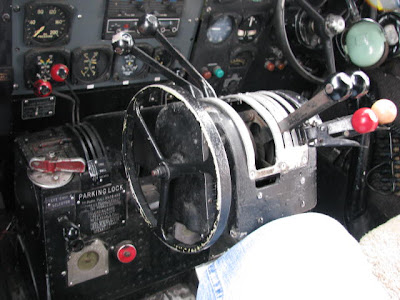 This beast must be a pain to taxi, as you cannot look directly forward most of the time--the nose is pointed up toward the sky--leaving you only the side window to see the ground and the tail wheel and your propellors to move you in the direction you want to go. However, the view from up there is pretty impressive, as long as it's not raining. (Correction from Scott: the tail wheel has no role in turning--thanks for the catch!) 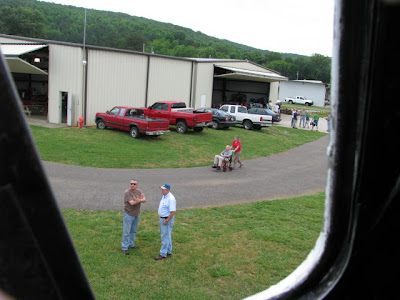 Who knows how much longer hobbyists will be able to keep the "Dakotas" or DC-3s or C-47s in the air using their original equipment. But while they can, it's worth your time to see one of these planes up close. Seeing one in the Air & Space Museum is one thing. Climbing into one that's still flying is something else.
Posted by Bart at 8:22 PM