I was came to this book in a roundabout way, but I was really glad that I did: Architecture for Astronauts provides a high-quality, user-friendly overview of habitats designed for long-term human occupation in space. If you note the price, you'll see that the book is not inexpensive, but the author, Sandra Häuplik-Meusburger (hereafter SHM), has gone to great lengths to make the content accessible and visually appealing.

Beginning with an overview of the spacecraft--Apollo, the Salyut series, Skylab, Mir, Shuttle, and the International Space Station (ISS)--the author explains why some spacecraft were covered, but not others. For instance, while the Mercury, Gemini, and Soyuz spacecraft all had long missions, they were not included because they were more or less made for transportation, not habitation. Another nice feature of the front matter is that it provides infographics depicting how mission time and habitat space are allocated. In the case of describing the interior space, SHM depicts the spacecraft architecturally and logically. For instance, there's a nice table on pages 92-93 showing where astronaut activities are performed within the common area(s) of a spacecraft--work, sleep, hygiene, eating, and leisure--and which are performed in a detached area. For instance, an extravehicular activity (EVA) is depicted as being "outside the circle," while eating, hygiene, and leisure occur within a common area or areas. 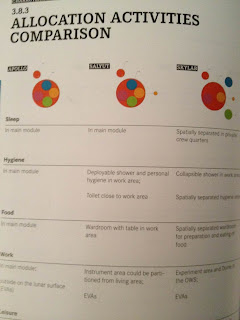 The color-coding is also useful, as it ties to the colored edging tabs for each primary section (sleep, work, etc.). Along with color-coding activities in space, SHM provides some handy tables, such as the one above, which list the attributes of individual spacecraft vertically to allow the reader to get an overview of that system as well as horizontal comparisons by attribute. Also, each major section includes a set of lessons learned (called "Design Directions") for future spacecraft designs. Lastly, each topic is covered in a series of two-page spreads so you don't have to flip back and forth. In short, a lot of work went into making this book visually appealing, accessible, and useful.

I would consider this to be a good introductory textbook providing a historical overview of human-rated space systems for the space architecture practitioner. If you're looking for a good look into human factors in space, I would recommend this book as a starting point, then shift over to Out of This World: The New Field of Space Architecture, which concentrates more on the structures than the astronauts and Patricia Santy's Choosing the Right Stuff, which delves into the evaluation and selection of astronauts (and which I still need to read!).

For someone like me, who's an enthusiast, the book provides just about the right level of detail. If you want to know more, each chapter provides an extensive list of sources, including interviews conducted with nine astronauts across the entire range of systems (though I was mildly surprised that there were no women included among the interviewees).

I mentioned that I came to this book in a roundabout way, so I'll explain that briefly. The author of this text coauthored a paper with an American I met at the Global Space Exploration Conference. That paper concentrated on one area covered in Architecture for Astronauts: the inclusion of plants as a way to improve the quality of life for astronauts on long-duration space missions. I liked the paper, became friends with the coauthor, then acquainted with the author via Facebook.

What I got most out of this book is how downright unusual and unnatural human travel through space is. I've been on the machinery end of NASA for six years, and I tend to forget about the people actually doing the work. It's not just a matter of making machines that can survive launch, orbit, and landing in space environments, you have to make those machines capable of keeping humans alive, safe, healthy, and sane for days, weeks, or months at a time. It's not just a matter of cramped quarters or zero gravity, but radiation, loud noises, isolation from friends and family, and overwork that can creep up on the astronaut and make him or her a little stressed. And after reading the section on "Hygiene," I've never been so grateful for Earth gravity and regularly functioning toilets. At any rate, we're still a long way from Star Trek and "normal" life in space.

If Architecture for Astronauts has one flaw, it is that the two-page-per topic format prevents the reader from getting too far in depth with any one subject, which made me want to know more about how all this stuff fits together. In that case, I suppose, this book is a resounding success!
Posted by Bart at 9:56 AM