Brother Karl's dad is at Oshkosh and managed to get a decent pic of WhiteKnightTwo. 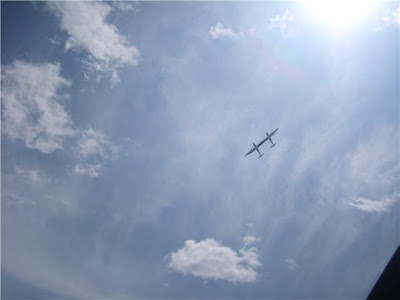 Darlene the Science Cheerleader is promoting the Future City competition, which encourages kids to think about technology and social issues in a real-world environment. I attended this competition last year and was suitably impressed with the kids' ingenuity. This year's task/theme is "Providing An Affordable Living Space For People Who Have Lost Their Home Due to a Disaster or Financial Emergency." This could be handled very simply, in my mind: coffin/capsule hotels brought in on semi-trailers. They're very tiny, limited in their drain on the environment, and tiny/uncomfortable enough that people will get themselves out of them and off the government dole as soon as possible just to get on with their lives. Just sayin'.

The Futures Channel has another video out on the Ares Projects.

Fred Thompson has an interview with Betsy McCoy, a patient advocate who provided much of the ammunition to bring down the Clinton nationalized healthcare plan.

The Cash for Clunkers deal has a hitch--some deals have been stopped because the EPA changed the gas mileage rules, effectively preventing some people with "clunkers" from getting their check. This sort of thing would never happen if the government ran the healthcare system, of course.

In the midst of the Augustine Panel swirl, the Mars Society is holding its annual citizen-lobbying blitz to press for Mars exploration.

More on The Swirl and other topics from Melissa:

This one from the Down Under Defense Expert (DUDE). Ick: http://www.breitbart.com/article.php?id=D99OAQ2G1&show_article=1