I try not to talk about my day job much because quite frankly I like to keep my work life separate from my blogging life, but today is a little different. After three years or so of writing conference papers for the Ares I-X flight test, I watched the rocket actually roll out to the launch pad today and it is now a week away from lifting off. This is a major deal, not just for NASA (or me), but for the country as a whole. We've needed something to inspire us for awhile...something beyond politics, something we could all look upon with pride, as an actual achievement. Ares I-X just might be it--the first test flight (but not the last, if I can help it) of the Constellation Program.

Why is this flight important? Allow me to backtrack a little bit, to when we lost the Space Shuttle Columbia. People in the media, in the White House, and in the general public were asking, "Is going into space worth all the risk? All they ever do is go around in slow-motion circles in that space station up there." The Columbia Accident Investigation Board took the nation and its leaders to task for not doing something more ambitious. After all, if astronauts are going somewhere new and exciting--doing something worthy of a spacefaring nation--then yeah, any heroic losses might be deemed acceptable.

The Bush Administration came out with the "Vision for Space Exploration," which gave NASA the mission of restarting Shuttle (safely), finishing the International Space Station (ISS), building a new crew exploration vehicle, and building a base on the Moon in preparation for more ambitious missions to Mars. They theoretically promised NASA increased funding to do the job, with LOTS more funding after Shuttle retired. In 2005 NASA got a new administrator, Mike Griffin, who put together a study to decide what vehicle types would be best to execute the series of missions Bush tasked NASA to accomplish.

The study came up with new rockets that would eventually be known as the Orion crew exploration vehicle, Ares I crew launch vehicle, and Ares V cargo launch vehicle. Ares I would launch crews into low-Earth orbit (LEO) to support both ISS and missions beyond low-Earth orbit. Ares V, a rocket bigger than the Apollo-era Saturn V, would launch a lander into orbit along with an upper-stage rocket that could send the lander and the crew off to the Moon, asteroids, wherever. This two-launch concept is what NASA has been building for the last four years.

Ares I is the rocket being built now. It's needed first, and soon, because we're planning to retire the Space Shuttle as soon as the ISS is completed. Now there's a lot of debate going on in Washington about whether to keep Ares I, Ares V, Orion, and the rest of what's called the Constellation Program. The Obama administration tasked the Augustine Human Spaceflight Review Panel with reviewing the current plans and making recommendations about what to do next. Will we continue with Constellation? Turn over low-Earth orbit to commercial companies and international competitors? Or something else entirely? The Panel doesn't have the final word--Congress and the President do--so if you care about whether America keeps doing great things with people in space, it's not too late to have your voice heard. The Congressional switchboards are always open. :-)

So where does Ares I-X fit into the picture? Ares I-X is the first development test for Ares I. It's not a full-up launch vehicle, as it lacks an upper stage, a five-segment solid rocket booster for the first stage, and an Orion spacecraft on top. But the point of the test is not to get into space, the point of the flight is to get the beast to lift off and fly in the proper way and direction, under control, within the atmosphere. While the rocket might look like many others you've seen (long and cylindrical, pointy end on top, fire coming out of the bottom), Ares I does in fact have a different design from any rocket tried before. The upper half of the rocket is about six feet wider than the bottom. A human-rated rocket has never flown with only a solid rocket motor for the first stage. So there are a few things that this rocket will test that engineers haven't done before. They need to:
All of this must be done new for the first time in nearly 30 years. The very first flight of the Space Shuttle had a crew on board because they needed people on board to fly the orbiter home--but that was a huge risk at the time. Development testing allows NASA to go back to the more incremental form of testing that Wernher von Braun favored--where you test part of the rocket, make sure it works, and then test the next stage--before putting people on top of it. 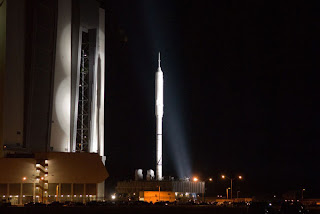 Ares I-X has a four-segment solid rocket motor from the Space Shuttle's inventory and a hollow fifth segment simulator that both simulates the length of the Ares I first stage and houses most of the avionics that control the vehicle. The upper stage, crew module, and launch abort system are all simulator hardware, shaped to look as much like Ares I as was possible when the design was conceived three years ago. The upper sections also have hundreds of sensors aboard that will measure temperatures, pressures, vibrations, noise, winds, and any other forces that could affect this rocket in flight. Some of the data these sensors collect will be transmitted down to the ground "live," and some will be stored on board in that first stage avionics module and will be picked up when the first stage splashes down in the ocean. 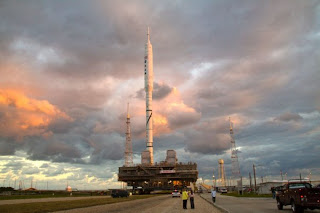 What can you expect to see on this flight? If all goes well--and there are hundreds of people working around the clock at Kennedy Space Center right now to ensure just that--the first stage will ignite just like the Shuttle's boosters, and the rocket will move upward past the tower. It should take about six seconds from the time the hold-down posts release until the aft skirt clears the tower. Once past the tower, the roll control system (RoCS) will rotate the rocket 90 degrees to orient the rocket the way Ares I would fly and to point the antennas so they can send their data to receiving stations on the ground. After that, the rocket will continue accelerating upward and outward at Mach 4.7 (over 3,500 miles per hour) toward the Atlantic, the booster firing for about two minutes, just like Shuttle.
Then, just over two minutes into flight, a ring of explosive charges on top of the first stage will ignite and a set of smaller rockets on the aft skirt of the first stage will fire forward to split the first stage from the upper stage and pull it backward. The upper stage will continue downrange like a cannonball, and eventually fall into the ocean. The first stage booster will fall toward the ocean, and the main parachutes will open when it's about 3 miles above the ocean. Total mission time, just over five minutes.
And that's it? I can hear people ask. Yeah, but anyone who has ever been to a live launch will tell you that that's plenty of excitement for five minutes. And it's a bunch of things we haven't done before with a rocket that has never flown before. Are there dangers? Are there risks? Are there things that can go wrong? Of course, because it's a test, and it's never been done before. But jeez, what's life without a little risk? And if we really want to set America back on the path to being an exploring, spacefaring nation, it's definitely a step in the right direction.
The launch window opens at 8 a.m. Eastern Time (12 noon Greenwich Mean Time) on October 27, and lasts for four hours. Tune in, and have a look at what your space program has been up to while you've been ignoring it. They just might surprise you.
Oh, yeah...I will heading down to Florida to support Ares I-X starting Thursday. Is this a cool job, or what?
Posted by Bart at 8:18 PM