The following is an edit of some of my thoughts after my visit to the Dachau concentration camp in Germany, outside Munich.

Cruelty sanctioned by the state is that much more horrific because there's no one to appeal to short of another state (assuming they care) or God. And what if Hitler had won the war, and the evil had gone on and on?

The evil didn't stop with mere physical abuse. Humiliation and degradation go hand and hand with the operation. Bodies are meagerly clothed in institutional striped uniforms; heads are shaved, gold fillings removed; the people are underfed and then made to work as slaves. More beatings for poor work or slacking off or passing out from exhaustion. Survival is obtained through favors or kowtowing or luck or a raw, relentless will to live. 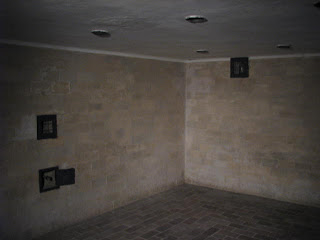 But all those qualities need not matter. Illness might come, or injury. Lacking a healthy immune system, positive attitude, or adequate medical care, one might go from the infirmary to the firing squad or the gas chamber. Naked, bewildered, disbelieving to the end that their own countrymen (or any men) would do such a thing, they nevertheless walked into rooms made to look like showers, and from those shower heads came a particularly nasty pesticide, Zyklon B. People would push and claw their way toward the door to escape. Those not crushed succumbed to the gas.

The horror didn't end for some. The chambers had to be emptied and cleaned, which meant some prisoners--tattooed on their arms, like the dead--were ordered to remove the bodies and then bury them or throw the bodies into industrial ovens.

Every day like this for six years or more. Some deny it happened, and some just wish it would. How dare they? How dare anyone?

Human minds did this, calmly, rationally, methodically. Every step of the way there were men who did the work, signed off on it, and moved the horrid mechanisms down the next step in the chain. So what if you loved your country? So what if you hated your enemies? Was engineering death at such a personal level worth it?

I make no claims to purity of intention, that I could somehow have been "the good German." That step in the process where I mention writing down the processes? That would've been the technical writers of the day. One of my grad school professors included a section in his book on technical communication ethics on procedures written for a mobile gas chamber the Nazis tried to develop. The person who had to write that stuff--what kind of nightmares did he have? But he did the work anyway.

*
And the question still comes back: how does a person or a party manage to twist a nation's conscience so? "Nazi" is thrown around as an epithet today as if every political enemy were automatically as evil as Hitler, probably because Hitler did not start with big things off the bat. He started small. And human nature is not that different across distances of time or nationality. It can start with not liking a particular already-unpopular group of people. You don't say anything because, while you don't exactly hate that group, you don't exactly like them, either. And if, say, the government started targeting that group for extra taxes, punishing fines, or hostile treatment, well, you're likely to shut up because you don't have a dog in that fight. The day might even come when you personally benefit from the government's campaign--they take property and possessions from the unpopular group and give it to you. You are now in the government's pocket, as they well know. You've accepted their moral premise, and you've profited from their (and your) moral lapse. How can you speak against the government now? And when your country goes to war with someone else, welll, you're all the more likely to volunteer to fight and fight hard, because you don't want to be on the losing side. After all, you know what you did. And if you get letters from your wife that the people in X group have disappeared and there are rumors of death camps, that's just wild speculation, enemy propaganda...but you can't help wondering how true it is. After all, you know what you did.

*
But all these attitudes still have to come from somewhere. A people's moral and ethical compass isn't lost all at once. That compass is directed by religion and philosophy. Drop religion, as so much of Western Civilization has done, and you're left only with philosophy, and the 20th century produced some of the nastiest schools of thought in human history. The beliefs of these schools include beliefs that:

Dachau is a stain on all of us, not just the Germans or Western Civilization, but upon all human beings. Philosophy led the way, science and technology merely cleared the path. 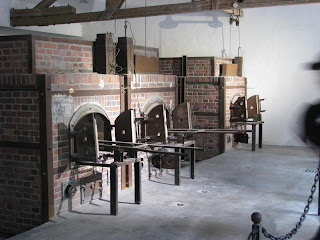 What got to me were the damned ovens. It's one thing to hear about them or read about them, or even just see a picture; it's another thing to be there in the room with them, or to walk through the gas chambers and realize that the things actually existed. In fact, what bothered me the most was how clean everything at Dachau was...almost as if they could open for business at any moment.

A couple on my tour had visited a village in France called Oradour-sur-Glane. There, in June 1944, four days after D-Day, soldiers of the 2nd Waffen-SS Division Das Reich rounded up over 600 French citizens and massacred them. General Charles de Gaulle, after visiting the site, ordered the bodies buried, but the town to be left as it was...as a reminder. Oradour-sur-Glane was not on my tour, but I'd be tempted to go there at some point. Seeing things as they were, even after 60+ years of time had worn things away, seems to bring home the point better than this spruced-up museum place at Dachau. It's just too clean to be believed or even, really, accepted.

Below are some other pictures I took during my brief time there. The compound is massive when walking it on your own, but small when you consider how many people they crammed in there at one time. The administration, prison buildings, walls, and guard towers are mostly intact--in fact, the U.S. Army kept prisoners in the prison building up through the mid 1950s. The barracks have been torn down, with two reconstructions built. There were 30 long shacks in all, the outline of each depicted by concrete perimeters (the original foundations?). A long row of poplar trees fills the aisle between the two rows of buildings...unlikely to be original. The prison building is now a museum, which includes maps, pictures, equipment from the camps, memorial stones and flowers sent by various cultural and military groups, and art inspired (if one can call it that) by the camps.

This piece is a little creepy, featuring as it does emaciated, burnt-looking corpses. In fact, corpses, barbed wire, and madness are prominent in all the visual representations found at the camp, including at some of the religious sites. 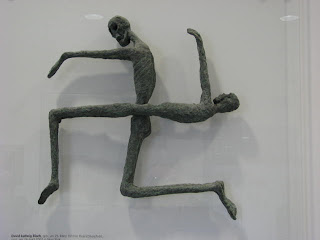 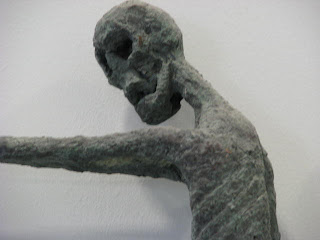 The uniform worn by prisoners. 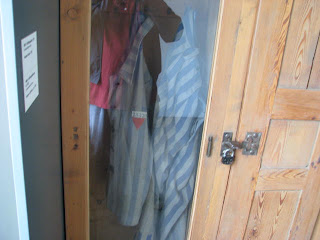 One of the pictures from the museum. No apologies for the horrific nature of it. That is why we visit these places--so we don't forget. 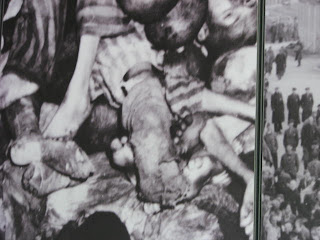 Another image from the museum, this one drawn by one of the prisoners, shows the beating of one of the prisoners by several guards. Again, this was done by agents of the government, acting under the express command of the highest levels of leadership. 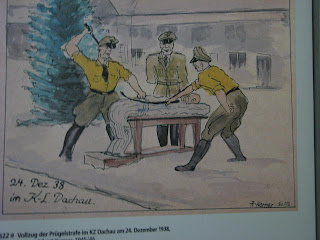 The camp has several religious buildings attached to it, including a Jewish shrine, a Catholic shrine, a "Reformed Christian" church, a Catholic nunnery, and an Eastern Orthodox chapel. There was a service occurring at the latter when I arrived, but out of respect I didn't take any pictures. 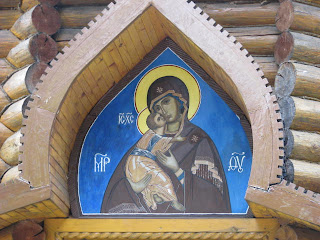 The gateway to the Jewish temple. Note the spikes. 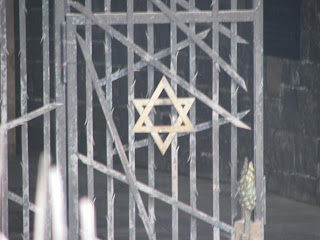 Exterior of the Jewish temple/shrine. Visitors walk down a ramp to the interior, as if walking into the grave. 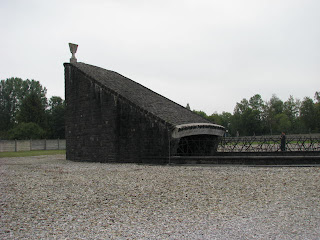 This is the Reformed Christian Church at Dachau. I don't understand the symbology, but there are half-crosses all around the building. Otherwise, the place seems to lack rational shape or symbol. Is that a message in itself? 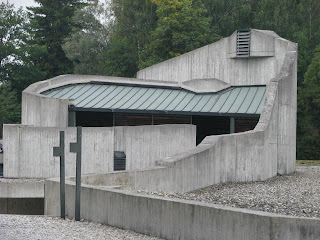 Another terrifying piece of sculpture: distorted bodies pieces together in all directions like some barbed wire experiment gone horribly wrong. 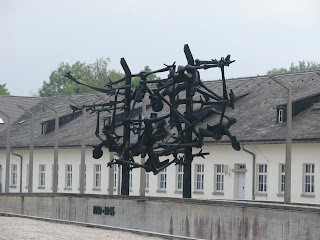 One of several guard towers still in place. 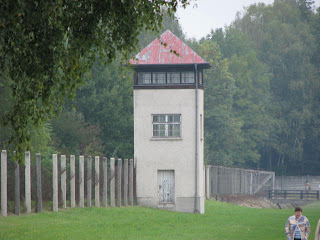 "Arbeit macht frei," the motto at the gates of Dachau, Auschwitz, and all the other camps, I believe, means, "Work makes you free." 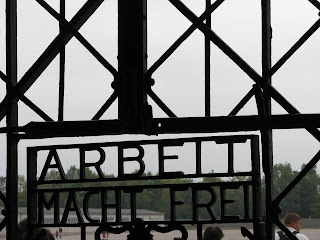 The smokestack from the damned ovens. 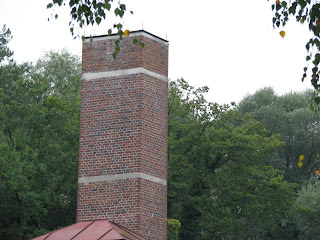 If those things were going as often as was estimated, there is no way the local people did not know. Expressions of denial were not sufficient for the American soldiers who saw these places, and rightly so. Everyone in Germany was--and is--required to visit one of the camps to rub their noses in it so they never forget. Good.
I confess, I came out of the camp wanting to bomb the country flat. But then I thought about it and realized that, no, living memory and constant reminders are absolutely necessary. How sick and unfortunate it is that human beings need such reminders. Not just the Germans, but all of us. But need them we do, to remind ourselves of what cruelty we are capable of...even bombing a country flat.
Posted by Bart at 7:08 PM