Over There vs. Over Here
It's a bit difficult to gauge the quality of life in Europe vs. here while on travel because bed-and-breakfast hotels are not always a good indicator of what "normal people" expect in the way of amenities...I would say that the number of bathrooms per hotel room has increased compared to when my parents were traveling overseas. Only had to share a bathroom once. But here are some things that caught my eye while on walkabout.
Bathrooms/Toilets/Water Closets (WCs)
Speaking of bathrooms, "WC" is the typical sign for locating bathrooms in Northern Europe. "Toilette" is more common in Italy and France. People are people, though, and if you look desperate people can generally guess what you're looking for. 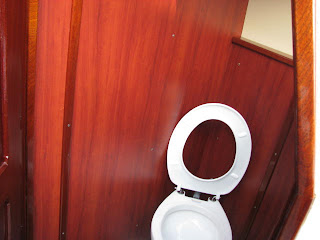 The smallest facility I saw on my trip, aside from the closet on the A330, was a commode on the canal cruise boat we took in Amsterdam. In Corniglia, Italy, I encountered what amounted to a porcelain indentation in the floor. In Paris I found a men's room commode with no lid. That means balancing yourself or giving the rim a good wipe-down. 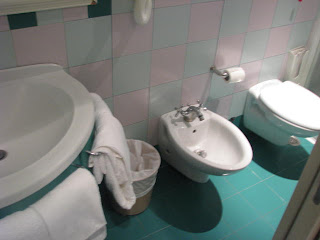 And yes, many of the hotel rooms had bidets with hot and cold running water. As long as you don't get them too near the bowl, they can also be used to rinse your clothes in one if hand-washing them in your room.
Cars, Trucks, Scooters, etc. 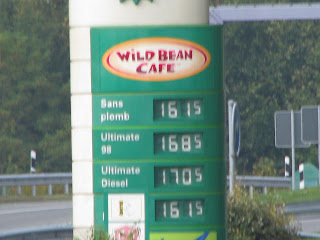 It might not surprise you to learn that there aren't a lot of American-made cars in Europe. In fact, I saw only one Chevrolet dealership, and that was in Paris. Given the narrow streets and soaring prices for gas (petrol)--€1.60 per liter, which comes out to around $8-10 per gallon, it's hardly surprising the behemoths like the Hummer or Navigator are not common. In the cities, the Smart Cars are popular for to-and-from traffic, but you wouldn't want to buy groceries or something would have to be ditched. They're so small you can park them perpendicular to the curb in some cases. 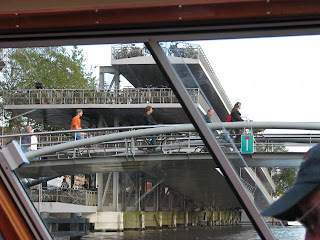 Bicycles swarm the roads in Holland. I saw a multi-level garage just for parking bikes, and our guide said there were something like 4,000 in that one structure. Craziness! 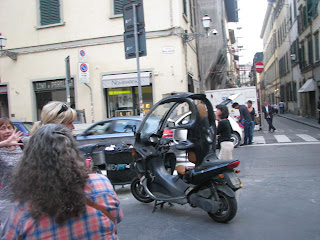 In Rome, it's scooters/mopeds, some of which have their own windshields. I did see a flyer for a Harley Davidson enthusiast gathering in Amsterdam, so there's one American product over there, anyway. One pleasant thing I found on the continent, as opposed to England, was the lack of car exhaust smells, especially diesel, in the city centers. Oh, and this was strange to my American ears: in Amsterdam, there was a remarkable lack of car horn honking! 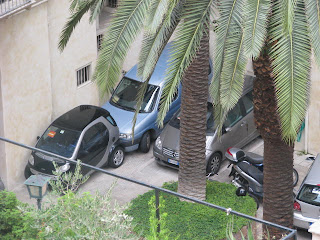 Architecture
One thing I liked about the big cities I saw was how much of their older characters they've maintained at their cores. In Amsterdam, it's still neat row houses (houses were taxed by the side of their facades, so homes are long and narrow) nestled between canals, lots of brick streets, and gabled rooftops. Thanks to uneven ground settling and the ages of the structures, several buildings are leaning quite a bit--to the point of looking slightly tipsy. 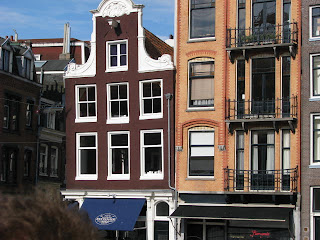 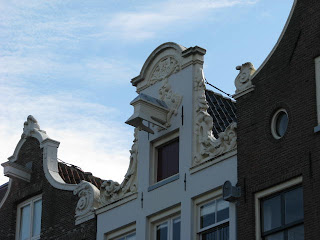 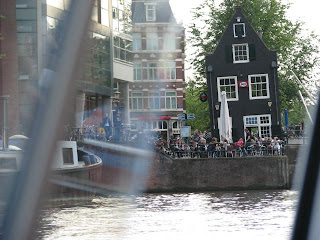 In Venice and Florence, the old city cores have maintained many buildings in the designs that were prevalent at the heights of their power and influence. For Florence, that would be the 13th and 14th centuries; for Venice, the 14th through 16th centuries. Venice impressed me--though caused me to slip a bit--through the use of marble sidewalks.
One of the images below is of the well in the courtyard of the Doge's Palace in Venice. A well is a well--it's not anything particularly exciting, just a place to draw up water--and yet it's a work of art unto itself. 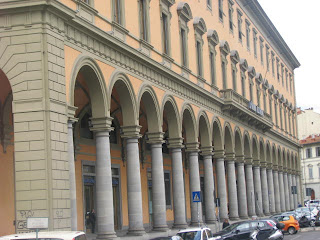 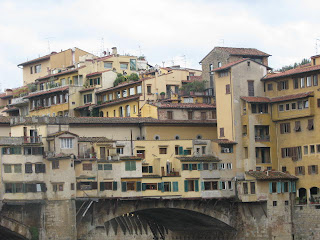 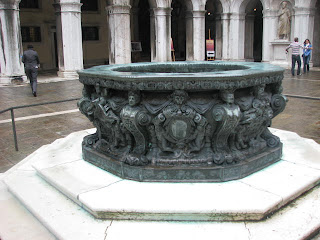 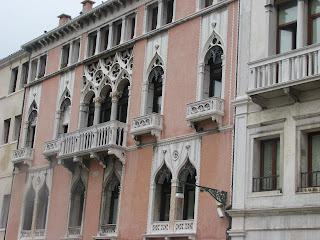 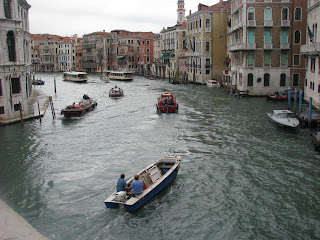 What interests me most is how much more effort is put into making public structures attractive--beautiful, even. The severe functionality of modern architecture leaves one cold at times. Sure, an entire skyline of sleek, shining skyscrapers can be visibly stunning. That is the American contribution to architecture. However, the strictly utilitarian ethos has its down sides. Ornament is a thing of the past, unless it's some equally abstract sculpture or blandly esoteric painting. A shopping mall in France, by the way, looks depressingly like many malls here in America: blah.
Other Things
Little thing I noticed in public buildings in Europe: most of the doors open inward, not out. In America, doors open out to ensure ease of exit in case of a fire or emergency. I guess the theory in Europe is to ensure ease of access--to let people in. Just an odd little difference.
I spoke a bit with the night clerk of my hotel in Paris, a loquacious man who had spent his first ten years in America before moving to France. He said that he and his friends admire America a great deal, mostly because "anything is possible." However, he and his friends think that we're too focused on making money all the time. The down side of life in France would be the speed at which people can advance themselves. For example, if an employee in France has a bright idea for making more money or improving a product, they're told to "come back in a year, we're not ready yet." Well, you know how that works in America: rather than sit on a new idea, the aspiring employee will get frustrated and either take their idea to the competition or start their own business to make it happen.
What my talkative night clerk and his friends miss about the fluid, dynamic social structure of America is that it is fueled by money. Money is the great equalizer. We believe (or used to believe) that "If you build a better mousetrap, and the world will beat a path to your door." Money can buy position and standing and respect while one's forebears might get you, at best, a political career. We are not as concerned with tradition here, we focus on results. Just because our father was a plumber or a civil servant doesn't mean you have to be. Birth is not destiny here. You might not be the boss now, but you could be someday! And the way you advance is by making or helping your company make more money. And to echo what Rick Steves says about Europeans, I wouldn't trade passports with anyone from Europe, either.
But as I noted a couple days ago, I do appreciate the Europeans' sense of balance: life's not just about your job, but about experiencing life, enjoying relationships, sharing meals and fine conversation. Americans talk about their jobs first. (I asked my tour guide what Europeans talk about, since work seems to be low on their conversational interest meter. She laughed and said, "They talk about sex, politics, and religion," all the things that are considered taboo and impolite here.) I'm not about to become a slacker, but I might change how I spend my leisure time. Rather than walk the neighborhood with a book in my hand, I just take the iPod and enjoy the scenery and the physical act of walking. I'm not flying off the handle at every little thing that bugs me. I've chilled out a little bit. I'm trying to bring the same focus on the new that I had on Europe back here. If you live your life as a tourist, then anyplace can become more interesting. So yes, there are always new things to learn, here or abroad. The question is: do you have a mind open enough to learn them?
Posted by Bart at 6:41 AM

I really love traveling to Europe since the architecture really is different from what we're used to, with carvings and all. And in France, the streets and cars are so small. Bathrooms are different, too because bidets are standard there.