I got this extended note from the Moon Society, which deserves reading. While Apollo 11 astronaut Buzz Aldrin might be a little overexposed, he's a very smart man, and his thoughts on space exploration deserve some attention.

Group: The Moon Society
Subject: Moon Society Endorses Aldrin's Proposal for a Lunar Infrastructure Development Corporation
Buzz Aldrin published a proposal for a public/private/international plan to open the Moon for exploration and development in the Huffington Post

Below are key excerpts:

Moon Society Officers and Directors, who collectively make up the Management Committee gave the Moon Society's official endorsement. The email vote was unanimous.

As Ben Nault, Director from Tucson, put it: “Probably the main reason the ISS is still "alive" and supported by Congress is that it is part of a number of international agreements. Backing out of these agreement would have financial, political and diplomatic repercussions on the US. Therefore, having an international component helps large complex programs survive the transition to different administrations and different congressional moods. The international angle gives long-term "sustainability" to the Lunar Infrastructure Development Corporation.

“In asking for Committee member support, we pointed out significant similarities with our own proposal, also strongly endorsed byCommittee members, for an International Lunar Research Park. Bothproposals are for public/private/international collaboration. There are, of course, those who would prefer a NASA-stand alone effort, and those who would prefer a purely private enterprise approach. But a reality check shows that the public/private/international approach will be much more robust, and stand a much greater chance of becoming a permanent beachhead on the Moon. It is also much more likely to lead to the first civilian industrial settlement.And that is precisely the Vision of the Moon Society. The Moon Society urges other pro-space organizations, the public, and the media to support Buzz Aldrin's proposal.

Thank you for your support

The Constellation Program has a pretty cool 12-minute video explaining some of the roles flight testing have in making a better space program. 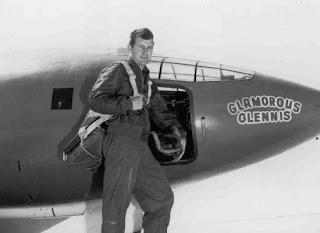 Your useful piece of trivia for today: 62 years ago today, Charles E. "Chuck" Yeager broke the sound barrier--750 miles per hour in level flight over the high desert of California--in the Bell X-1. Tom Wolfe's The Right Stuff, the book or the movie, is still the best portrayal of the seminal moment in aviation history. Saaaa-lute!

There's a web site out there that depicts every space mission ever sent to other worlds of the solar system. Very cool!

From my AIAA news feed:
Some Astronauts Annoyed At SpaceX's Dragon
The Orlando Sentinel (10/14, Block) reports, "Asked what bugs them most about NASA outsourcing the job of flying crew to the International Space Station, some astronauts roll their eyes and say: 'Dragon,'" the manned capsule being built by SpaceX, because of the fear of being "little more than human cargo" since the ship is fully automated. "SpaceX has hired its own former astronaut, Ken Bowersox, to make Dragon more astronaut-friendly," a move the article describes as a "clear example of how serious it is about leading a new commercial era in American space exploration." The article, positively describing SpaceX's efforts, notes the "biggest concern" of "astronauts, NASA officials and some members of Congress" is that "SpaceX ships are rivals to Ares and Orion, a view SpaceX dismisses." Bowersox describes the ships as "enablers" for NASA to conduct exploration.

From the Wall Street Journal:

From Lin: Sheriff Arpaio, the tough-guy from Arizona, vows to continue sweeps to capture illegal immigrants while the Obama administration would prefer that he not.

Some late-breaking news from the Drudge Report: Rush Limbaugh has been dropped from a group bidding to purchase the St. Louis Rams. The sole reason for this is his political views, however tactfully or tackily expressed, and the negative publicity they generated. The campaign run against him and the restraint of trade that this campaign has now created sets a very ugly precedent: the NFL has just announced that Limbaugh's cash is good only at the ticket gate or the bar, it won't be accepted in the front office. I wonder what would happen if another conservative ever decided to invest in a football team. Heck, I wonder what would happen if I ever decided to. It will be interesting to see what the fallout is from all this. Limbaugh won't take it lying down: of that I am reasonably certain.