Friday night, and I've got an inbox to clear out. Consider yourself warned.

What has the space program done for you lately? Check out the NASA Spinoff site.

Want an opportunity to help the space program? The letter posted here is being passed around Capitol Hill to get members of Congress and President Obama to support a markup of $3 billion to NASA's human spaceflight budget. This is necessary if we are going to get the Constellation Program on the right track. Truth be told, NASA needs an extra $3B per year for the next 20-30 years or more to develop a truly useful exploration program that pushes the boundaries of technology and sends humans to really cool places. But heck, you've got to start somewhere.

This press release from my NASA PAO feed deserves to be quoted in full:

WASHINGTON -- NASA will award $1.65 million in prize money Thursday to a pair of innovative aerospace companies that successfully simulated landing a spacecraft on the moon and lifting off again.

NASA's Centennial Challenges program will give a $1 million first prize to Masten Space Systems of Mojave, Calif., and a $500,000 second prize to Armadillo Aerospace of Rockwall, Tex., for their Northrop Grumman Lunar Lander Challenge flights. The competition was managed by the X PRIZE Foundation.

The Northrop Grumman Corporation is a commercial sponsor that provided operating funds for the contest to the X PRIZE Foundation. An awards ceremony for the winning teams will be held at noon on Nov. 5 in room 2325 of the Rayburn House Office Building in Washington. Journalists should contact Sonja Alexander at 202-358-1761 for more information about the ceremony.

The Northrop Grumman Lunar Lander Challenge involves building and flying a rocket-powered vehicle that simulates the flight of a vehicle on the moon. The lander must take off vertically then travel horizontally, flying a mission profile designed to demonstrate both power and control before landing accurately at another spot. The same vehicle then must take off again, travel horizontally back to its original takeoff point and land successfully, all within a two-hour-and-15-minute time period.

The challenge requires exacting control and navigation, as well as precise control of engine thrust, all done automatically. The rocket's engine must be started twice in a short time with no ground servicing other than refueling. This represents the technical challenges involved in operating a reusable vehicle that could land on the moon.

Masten Space Systems met the Level 2 requirements by achieving accurate landings and captured the first place prize during flights of their "Xoie" (pronounced "Zoey") vehicle Oct. 30 at the Mojave Air and Space Port. Masten also claimed a $150,000 prize as part of the Level 1 competition.

Armadillo Aerospace was the first team to qualify for the Level 2 prize with successful flights of its Scorpius rocket Sept. 12 in Caddo Mills, Tex. Armadillo placed second in the Level 2 competition, earning a $500,000 prize.

The average landing accuracy determined which teams would receive first and second place prizes. The Masten team achieved an average accuracy of 7.5 inches while Armadillo Aerospace's average accuracy was 34 inches.

The events of the past two months have brought the four-year Northrop Grumman Lunar Lander Challenge to a conclusion. All $2 million in prize money has been awarded.

"The Northrop Grumman Lunar Lander Challenge has had its intended impact, with impressive performances by multiple teams representing a new generation of aerospace entrepreneurs" said Andrew Petro, NASA's Centennial Challenge program manager at NASA Headquarters in Washington. "These companies have demonstrated reusable vehicles with rapid turnaround and a surprising degree of precision in flight, and they have done all this at a much lower cost than many thought possible."

In the Level 1 competition, Armadillo Aerospace previously claimed the first place prize of $350,000 in 2008. Masten Space Systems qualified for the remaining second place prize on Oct. 7, 2009, with an average landing accuracy of 6.3 inches. Because there were no other qualifying Level 1 flights this year, the Masten team will receive the second place prize of $150,000.

NASA's Centennial Challenges program's goals are to drive progress in aerospace technology that is of value to NASA's missions; encourage participation of independent teams, individual inventors, student groups and private companies of all sizes in aerospace research and development; and find innovative solutions to technical challenges through competition and cooperation.

The Northop Grumman Lunar Lander Challenge is one of six Centennial Challenges managed by NASA's Innovative Partnership Program. The competition was managed for NASA at no cost to the taxpayer by the X PRIZE Foundation under a Space Act Agreement. NASA provided all of the prize funds.

Did you know Mercury had seasons? That's just one thing the Mercury MESSENGER probe has been discovering during its flyby missions.

Speaking of planets, it's getting crowded in the sky--32 new extrasolar planets (that is, planets outside our solar system) have been discovered.

From Doc: This is just wild...someone has taken the time to do a visual diagram of the primary characters in several epic movies or movie series (Lord of the Rings, Star Wars, etc.) and their proximity to each other over the course of the story. The character lines for Twelve Angry Men are just a hoot. 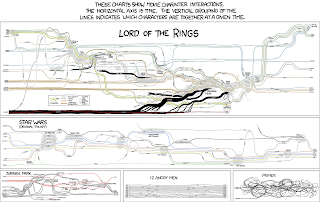 There's an educator's conference on Apollo at the Air & Space Museum in Washington, DC, November 10.

After all the fun we had with triboelectrification on Ares I-X, this t-shirt was pretty funny.

And that, as they say, is that. Have a splendid weekend. Please pray for the families of those shot and killed at Fort Hood.
Posted by Bart at 8:12 PM