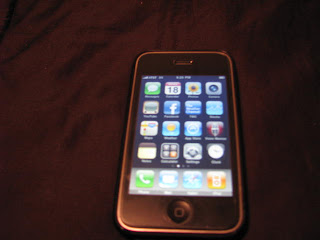 After much shopping and soul searching, I broke down on December 22 and bought an Apple iPhone. I have resisted Apple products mostly because I don't appreciate being called an illiterate heathen (or the equivalent) because I use Bill Gates products. I'll stick with Gates just because I hate being condescended to. At any rate, I went around and around on this. I knew I needed a smart phone because I wasn't likely to make enough money to hire an administrative assistant to maintain my calendar, and I found myself missing things in email just because it wasn't in my hand THAT INSTANT. Amazing how communication technologies can quickly change our expectations of what's possible.


The Apple Store people at Bridge Street Town Centre were nice, if a little cocky about their products (note my earlier statement). However, I had already shopped around for the Droid and the rest of the Verizon smart phones, and most of them drove me up the wall with their infant-finger-sized keys and lack of capability as compared to iPhone. So I relented. I had no contract with Verizon, and they had not fixed a texting issue I'd had for over a year, so they weren't on my happy list. The only gripe I'd heard about iPhone was that AT&T's coverage was sporadic--the current theme of Verizon's commercials. Otherwise, the product worked.

So I asked as many questions as I could while at the Apple Store, the primary one that came to my technical writer's mind being, "How big is the manual for this thing?" The sales dude rather smugly informed me that Apple had gone green/paperless, and that the entire tech manual was online. Great, I thought, until your internet is down. But nevertheless, I was reassured that the interface was intuitive and that I wouldn't need a manual for much. They handled transferring my phone number, had me set up that day, and shazaam! After taking the machine home and fiddling around with some buttons for a couple hours, I found that, in fact, everything the Apple had told me was true:


My favorite "iPhone moment," the one that sold me on the product as an impressive tool, happened in Orlando, when I was scheduled to meet D2 for lunch at a place called The Ravenous Pig, a restaurant she'd raved about but I had never visited. I started by looking up the restaurant on the Yellow Pages app (free). The YP app had both the restaurant's phone number and a "Directions" key. When I pressed it, the machine asked if I wanted directions from my current location. I pressed "Yes," and a map was generated there on the screen. I was sincerely impressed.

Now this isn't to say I haven't had my "moments" with the iPhone. The least-attractive feature so far is the actual phone feature itself. I have the Leahy Ear, which means I'll be looking for a hearing aid in about 20 years. But even so, the sound quality on the phone is not great, and it took a little gratuitous fiddling with buttons and asking a few friends (no, I did NOT use the online help, more on that in a minute) to finally get the volume turned up. A minor annoyance, but still a practical issue, considering this is an iPhone.

Second, the online help is not easy or intuitive. It took awhile to find the correct set of keywords to get the answer to the question I wanted (e.g. "How do I get the music on my iPod onto my iPhone?").

Third, the tiny screen is nearly useless for a long stretch of web surfing. My buddy Doc did show me how to expand the screen, which is a pretty clever combination of using two fingers to "stretch" the image on the screen, but it was not immediately obvious.

Fourth, I've had a recurring problem with the Facebook app getting "stuck" on one screen and not returning to its "home page." The only way to clear the problem seems to be to make sure I exit the app FROM the home page. Otherwise, I have to delete the FB icon from my iPhone desktop, reset the phone, and reset some other things as well. Not a major issue, but an annoyance for a habitual FB user like me.

Fifth, by allowing me to transfer my iPod music to the iPhone, Apple has in essence left me with a useless piece of equipment. My buddy Dr. OZMG is having problems with her iPod and doesn't have an iPhone, so she might be the lucky recipient of the now-orphaned iPod.

But the bottom line is that iPhone has convinced me of the quality of Apple products. That won't turn me into an Apple snob. The home PC is due to be replaced, and I will probably still resist buying a Mac, but the iPhone has another fan. Buy it!

I've posted Kindle product reviews here and here, and I still keep getting requests from friends on Facebook asking what my impressions of the product are. Hopefully, these links help. However, I would say that I've had less time to read and use my Kindle than previously. Life has become a little too busy. I still like paper books and want my local Barnes & Noble to remain open. I canceled my monthly Wall Street Journal subscription, not due to any discontent with the product--it's a fine newspaper--but I just don't have the time to read it. Which is also why I don't read the Huntsville Times and didn't subscribe to any local papers in Northern Virginia or Orlando. Life is just too busy, and the internet provides quite enough information as it is. That said, the WSJ cost only $14.99/month for Mondays-Saturdays (no Sundays or advertisements), so it's a worthwhile addition to your Kindle if you've got the time and inclination to use it. And even with a Kindle app on my iPhone, I still prefer the original, with its bigger, non-backlit screen.

Bottom line, if you're a book geek who's not afraid of a little technology and wants to keep several volumes on hand while traveling, Kindle is still a good toy to have.

Don't resist what you know is right. Apple is the way to go. Nothing beats an Apple laptop. It's two computers in one.

I will be getting my iPhone in July and I'm so looking forward to it.