Tonight was the first "official" Yuri's Night party in Huntsville, Alabama, which is surprising, given the number of space people here. Be that as it may, we started small, as most of these things do, with a party in a bar. The bar in question was Leeann's downtown. The crowd size was just about right for the amount of "stuff" we brought--giveaways, prizes, name tags, etc., though I think some of us overestimated the crowd size. Perhaps people were scared off by fallling temperatures?

Anyhow, I still haven't spent the time to learn how to use my overpriced camera correctly, so more than half my shots are barely visible due to lack of light. (If anyone knows how to make the flash on a Canon PowerShot S5 go on automatically, I'm all ears.) 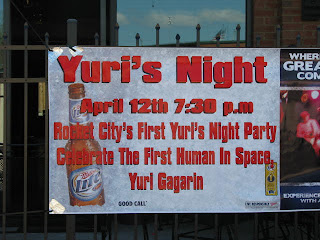 This is the "registration" table. We gave out name tags for people to fill out, asked people to sign up for information about next year's party, and gave out free stuff (pins, patches, candy, etc.). I spent most of my time manning the table so I wouldn't have to go outside. Heck, I don't like the cold, either. 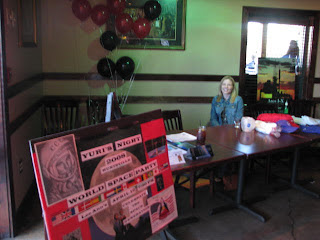 I have no idea who this young lady is, but she sat across from the registration table for awhile, and she was distracting enough that I thought I'd take her picture. She obviously didn't seem to mind. 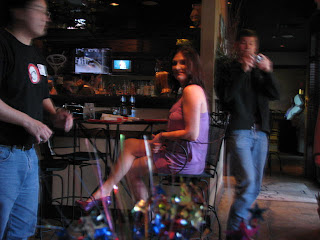 Part of the crowd in line at the table. We ended up handing out around 100-120 door prize tickets, which isn't a bad-sized group for our first time out. The "we" was a combination of HAL5, Huntsville Alive, ERC, and STEDTRAIN, which was collecting donations to provide teachers with money to educate K-12 students in the sciences. They did pretty well: STEDTRAIN collected around $1,100, and ERC was going to match whatever was collected at the event, so we did our good deed for the day. 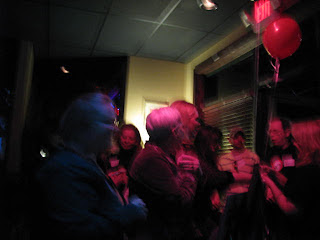 Next year we'll probably get more grandiose. I myself would prefer a less smoky location, but otherwise I had a reasonably good time. You can market the hell out of something, but you can't make people come. In the end, that's up to them.