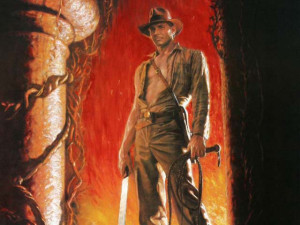 "You don't have to prove you're a tough guy all the time."
--Indiana Jones and the Kingdom of the Crystal Skull

"We cannot defeat this enemy!"
"No, we cannot. But we will meet them in battle nonetheless."
--King Theoden, Lord of the Rings: The Two Towers

"I dare much more than my makers anticipated."
--Duncan Idaho, Dune Messiah

I've stated in a couple of essays now (here and here) that I don't consider myself a particularly courageous person. And on some matters, I suppose that's still the case. But if I have a place in my life that I feel supremely confident--bold, even--it's in my career. When I was younger, writing was my escape from the people who sought to (and did) harm me. In fiction, I could be brave, travel elsewhere, and right wrongs as I saw fit. Along the way toward acquiring something approaching mental health, I also developed a useful skill, which has managed to pay my bills for the last 15+ years. I have thrown myself into my writing career and all the skills that accompany it, including learning the aerospace (or defense or tourism) business and working well with other people.

I have taken more chances with my career than others might have believed, including my family members, who remain bewildered at the line of work I've created for myself. It is no accident that the name of my professional blog is Heroic Technical Writing. I read a lot of books on leadership. I've learned how to write and think like a leader, if only to write speeches for those who lead. That requires a certain boldness of thought that I do not often feel or practice in my personal life, but in the line of duty, I can think courageously. In such ways do I find myself writing to or on behalf of executives, program managers, and prominent space advocates. I learned how to speak and write in the language of leadership. Maybe over the years, some of it has begun to sink in, and I realize that parts of my life do not match the bold rhetoric that I churn out on a daily basis as part of my job.

Courage, again for me, was taking out loans to pursue a master's degree in technical writing, not knowing if I'd even get a job afterward. It meant leaving the relative warmth and safety of Disney World and meant moving to a new city where I knew practically no one and nothing about the content I was being paid to write. It meant stopping an interview for "serious money" to take a shot at a space-writing job because that was my passion. It meant writing a proposal, giving the presentation, and then leading the team that ran an 850-person conference a couple years ago. It has meant leaving the theoretical safety of a large corporation to join a much smaller company. It has meant trusting myself to learn what I've needed to learn to write about difficult subjects coherently. For all my doubts about my ability to interact with people, I've never doubted my ability to learn about subjects that interested me. Since I started getting paid to write for a living (1996), I've never had writer's block on the job. I've been willing to "throw something against the wall and see what sticks" rather than think I have no idea what to say. If I'm in a business setting, representing my employer or myself, I can turn on the "Disney smile" and speak with others as if it were the most natural thing in the world for me to do. That was not natural completely natural for me, but I learned how because I felt it was important for me to learn it.

And perhaps I don't give myself that much credit when it comes to my personal life. I've spent 20 years learning to function on my own: living, moving, going out, and taking vacations (including a three-week jaunt to Europe). It has meant long hours being honest with myself about what's broken in my life and taking action to fix it. It has meant fashioning a personality, philosophy, aesthetic sense, career, viewpoint, and way of life for myself rather than attaching myself to some other individual and group and following their lead.

But as I've gotten older and I have different experiences, I realize that there is always room for growth, always places where I might show a little more gumption, for lack of a better word. Do I need to socialize more? Time to get out and do something. Do I need to write more boldly or viscerally? Write clearly about my doubts in an open forum. Do I need to demonstrate a little more professional value and independence? Start a blog talking about the craft of technical writing. There are things that I can do to improve myself, make myself better, and still manage to have fun. The challenge, as always, is admitting what's broken and be willing to take steps to fix it.

I'm not a soldier. I'm not a fireman, policeman, or electrical lineman. I'm not in any sort of role that requires great bravery or steady nerves (great patience, perhaps). I'm not interested in skydiving, mountain climbing, or running with the bulls in Pamplona. But I know I need to take more chances in this life of mine while I'm still relatively young, coherent, and healthy. Which chances, and where, I'm uncertain yet. I can't live a quiet, boring life forever. There are challenges to be had if I seek to pursue them. All it takes is courage.
Posted by Bart at 9:50 AM