The Subject of Courage, Reconsidered 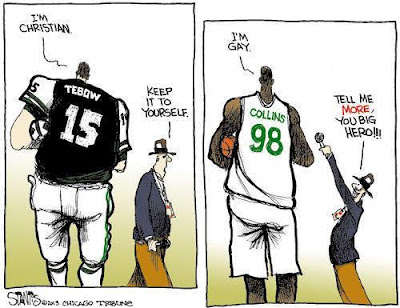 "I thought I was defending your honor, and I never run away from a fight!"
"Yes, you do. You do all the time!"
--Mal and Inara, Firefly

"Listen, you promise me something, OK? Just if you're ever in trouble, don't be brave. You just run, OK? Just run away."
--Jenny Curran, Forrest Gump

A few years back, when I was still living in DC, some idiot left her bag on the Metro. This was in the wake of the Madrid train bombing in 2004, and people were obviously a little tense. And by "people," I mean me. I was getting off at the next stop anyway, but I eased my way toward the other end of the car before the train came to the station. Not like it would've mattered, but still. As I was exiting the station, I saw some lady taking the bag to the station ticket seller to report the bag to lost and found. I thought long and hard about that episode for the rest of that day, and obviously it's still a sore spot. I remember thinking at the time, "Jeez, that was stupid!" but I couldn't recall at the time if I was thinking about my behavior or that lady's. Obviously I pointed the accusatory finger at myself. A braver man would have assumed it was a bomb and taken it off the train anyway.


There are men who would sooner admit to having parts missing than admit to being scared. Good for them. The best I can manage is calm or hysterical humor in moments of high anxiety (tornadoes, hurricanes, etc.). I call it "laughter from the brink." But yes, there are parts of America--specifically the South--where bravery is at the very heart of being a man. Of course with that bravery can come some other traits, such as touchiness, machismo, and a willingness to employ violence. Far be it for me to complain. A lot of our military comes from the Southern U.S., and that job requires a bravery most civilians cannot imagine because it's not required of them.

Even in social situations, moral courage is not considered a particularly popular virtue. Two of the most popular Christian aphorisms out there are "Judge not, lest ye be judged" and "Turn the other cheek." I've employed both over the course of nearly 44 years on this Earth. Part of that seemed to be required, as I was a small, frail child, and didn't reach a respectable (among males) height until I was nearly 20. A "late bloomer" was the polite term. "Wimp" would have been another one.

I spent the worst year of my life in seventh grade. Word got around (thanks to my grade school peers, but also thanks to the guys I'd played little league with a couple years earlier) that I was a weakling and a wimp--easily hurt, easily upset. It became a game to see who could get Leahy to cry first. Not being a fan of exercise, I had to get incredibly desperate to try karate as a means of regaining some self respect. If anything, I realized that I at least needed to understand the rudiments of fighting so I wouldn't get my ass kicked every time I was within one mile of school. Naturally, word of my effort got around, and one kid simply could not wait to test my new-found fighting prowess. So one month after I'd started--still clumsily trying to keep up with the calisthenics and learn the proper fighting stances--one of the bullies decided to test me out. Needless to say, I ran, and when the kid finally caught me, he clocked me a few times before deciding he'd made his point.

That was the episode that caused a much tougher friend to tell the rest of the toughs to leave me alone, and that sufficed to stop the physical beatings. The episodes of people following me home continued here and there, engendering a certain paranoia, but the bruises stopped multiplying. I got about as far as yellow belt before deciding I'd had enough karate. The next level up was blue belt, which included weapons training, and I wanted nothing to do with those. I'd gotten enough self confidence at any rate to learn how to change my social behavior and not act like a terrified victim.

But my experiences in childhood taught me this lesson: if you're smaller, weaker, and slower than someone, it's probably a good idea not to provoke them. Of course some people don't require an excuse for abusive behavior. I know of several folks who considered my very willingness to be friendly and agreeable contemptible and worthy of a beating, so you can't please everyone (you can, however, keep your distance).

Another thing I learned over the succeeding 20 years is that the larger the social group you belong to, the more likely you are to say something to offend others. There are two approaches to this sort of problem: not to give a damn what other people think or to make a conscious effort to be inoffensive and to apologize for any offense (my chosen route). None of this requires a great deal of courage, merely verbal cleverness and a trained sixth sense that avoids pushing anyone's buttons. So I steer clear of politics. I don't push my religion. At church, I don't argue with doctrines that bother me. In most personal relationships, I let things that bother me slide to avoid arguments. Part of this is just a general distaste for conflict, part of it stems from not allowing every little thing bug me anymore, but part of it is the opposite of courage (which I defined previously as a willingness to take action even when the outcome is in doubt).

The behaviors above make me welcome among a wider variety of people than I might associate with otherwise. I've got a very diverse circle of friends, with any number of personal opinions, political affiliations, and personal lifestyle choices that don't match mine at all. I'm probably better off for holding my fire in certain circumstances, but at what point do I assert my own views? At what point do I test the patience and tolerance of my friends? Agreeableness only goes so far before I lose my own voice, my own thoughts. If I allow the opinions of others to completely overwhelm my own, who will know what I stand for, or if I stand for anything at all? That is where a man proves his courage, is it not?

In the last essay of this series, I'll talk about where I've tried to exercise courage in my life. It probably won't surprise you to learn that I do so through my writing career. You've got to start somewhere, right?