The Vice of Courage 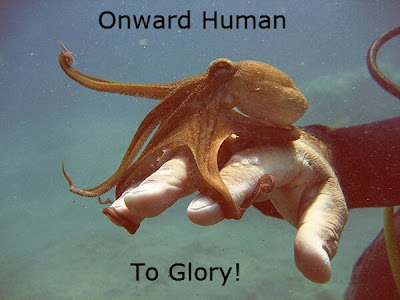 Most civilization is based on cowardice. It's so easy to civilize by teaching cowardice. You water down the standards which would lead to bravery. You restrain the will. You regulate the appetites. You fence in the horizons. You make a law for every movement. You deny the existence of chaos. You teach even the children to breathe slowly. You tame.
--Frank Herbert, God Emperor of Dune
The great thing is not to lose your nerve.
--Jerry Pournelle

Yes, but these are not times for extraordinary men. Business is not war. Heroics are unseemly. They complicate.
--Adlai Niska, Firefly
"Come on! Show a little backbone, willya?"
--Raiders of the Lost Ark
A coward dies a thousand deaths, a hero dies but once.
--Julius Caesar, William Shakespeare
*
We don't talk much about courage these days, unless perhaps it's related to disasters or wars. Soldiers can be admired for their courageousness, but are just as likely to be denounced for being brutes or pitied as "victims of war." Firemen and policemen can be admired for rushing into the World Trade Center--and were--but the nation wants to abandon the war and forget 9/11 ever happened.

Oh, there are still moments where courage is called for today--in the face of social oppression, for example--though we live in a comparatively free society. There are moments like home invasions that call for personal courage, and some people test their courage on purpose through extreme sports or find themselves tested against their will through cancer or some other awful disease.

Yet where does that leave courage at home, in the human heart, in the workings of our daily lives? And what, exactly, do I mean by courage, and why do I feel its lack?

I suppose my personal definition of courage (composed during a five-mile walk this afternoon) boils down to this: courage is the willingness to take action even when you doubt that the outcome will be successful. It's not a virtue I was brought up with, cultivated in myself, or was expected to display. I find this lack unfortunate.
I also like John Wayne's definition of courage: "Real courage is being scared to death and saddling up anyway." Unfortunately, John Wayne was not a welcome presence in my household. In addition to courage, you see, Wayne had machismo, swagger, male ego, the aura of a tough guy--and that sort of stuff just wasn't wanted in a home run by a soft-spoken single mother. I don't blame Mom, but I'm learning in retrospect that it had long-term effects on how I faced the world, especially the world of my male peers.

It took me years to learn to stand up for myself. It wasn't like Mom told me to run away from a fight, but she had no advice to offer when it came to standing up for myself. As a result, I took a beating--several, in fact--until a tougher friend basically told most of the bullies to leave little Leahy alone. I finally got an opportunity to thank him through the miracle of Facebook a year or so ago, and it was a thank-you that was a long time coming. But behind gratitude lies that inevitable male resentment: if I'd had a set, the theory goes, I wouldn't have needed that help. But the absence of courage in my youthful training led me to doubt my ability to defend myself. This led to backing down from many a fight.

The funny thing is, Mom herself has noticed a lack in my behavior, but has been unable to quantify it precisely. Instead, she put it this way: "When I told you 'no,' you accepted it. When I told your sister 'no,' she kept trying." Now you can chalk this up to any number of personality traits: politeness, unwillingness to offend an authority figure, passivity, introversion, what have you. But it happens in my social dealings with other people as well. Told "no" by a woman that she is not interested, I accept it (albeit not always gracefully), and quit. Society has made this more problematic, as the line between "determined suitor" and "stalker" has become increasingly (and deliberately) vague. My history and behavior being what they are, though, I err on the side of caution and back off. Yet how many romance books or plays or romantic comedies have been about some guy (or gal) going to extraordinary lengths to win the love of the object of their affections? Sorry, that's art. We didn't really mean it...so I take no for an answer.

In social settings, if I sense that I am not accepted by a particular group, I tend to withdraw and find another group rather than fight to prove my worthiness. I justify it by saying that if people can't accept me as I am, then to hell with them. But how hard did I really try?

And how many "adventures" do I bypass (physical, social) because I doubt my ability to meet the challenge or fit in? Again, it might be a socially acceptable answer to say, "That (skiing, snowboarding, wilderness camp, speed dating, softball, volleyball, political rally) doesn't interest me." And 9 times out of 10, that's probably my actual answer. But there are times when I am interested but decide not to attend for fear of embarrassing myself, getting hurt (physically or otherwise), not fitting in, or not being liked. Yet there's no social sanction against social restraint. Occasionally you hear the phrase, "Man up!" but that's rare.

Perhaps it's a factor of my age. I'm nearly out of the demographic that reads Maxim magazine, where kicking ass and getting laid are the number one priorities, but I wasn't like that even in my 20s. How much of that is a factor of being an "INFJ" or a "sensitive soul" and how much of it is just the result of being a plain old coward? I don't know. But somehow it has always been easy to take the easy way out and not try (to ask someone out, to tell someone to go the hell away, to punch someone who desperately deserved it). Society, for the most part, has given me a pass when it might have been better for me to take a risk. We don't do that sort of thing, anymore, do we?

So let's say I decide to find some social or personal courage. What would it look like, what would change? Maybe I'd stop caring so much about others' opinions of me. Maybe I'd date more, have more breakups, and get into more fights. Would that matter? Would my life be better somehow? I can't say. In my professional life, I've displayed a lot more gumption and willingness to take chances, though I stopped writing fiction or expressing political opinions years ago--in part, because I wished to avoid giving offense with some of my philosophical asides. How healthy is this? Do they even teach fortitude and moral strength to males anymore, or are those behaviors considered (as noted above) unseemly?

I feel that the social backbone--the willingness to stand up for oneself, fight for what one believes--is born through the cultivation of courage. Going back to my earlier definition, I realize that, all too often, when I doubt the outcome of an action, I won't take it, preferring a sin of omission to one of commission, and yet something inside me feels that Shakespearean admonition of "a thousand deaths." Without becoming some extreme sports nut or volunteering for the armed services, how does one cultivate a courageous life at this age? In this time? What do I need to be courageous about, anyway, and how would my life be different if I embraced that virtue that others think is a vice?

Welcome to my mind.

This is the first of three essays on this subject. Part 2 can be found here, Part 3 here.
Posted by Bart at 9:20 PM